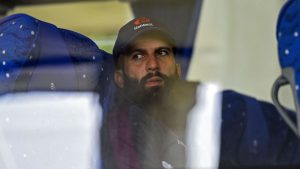 The Deputy Director General of Health Services Hemantha Herath confirmed on Wednesday (13) that the English tourists who was reported earlier to have been infected with the new variant of Covid-19 is none other than England Test cricket team member Moeen Ali.

Ali is one of the members of the England Test squad who are presently in Galle for a two-match Test series starting on Thursday (14).

England cricket team arrived in Sri Lanka from Hambantota on 3 January and their team management announced the following day that Ali had been infected with coronavirus and was under isolation along with one of his close contacts. He has reported to have passed three PCR tests before leaving England.

The Guardian in England said this week that Ali may miss both Tests in Sri Lanka due to the after-effects of the more severe new strain of the virus.

February 26, 2019 byRevatha No Comments
Sanath Jayasuriya has been banned from all cricket for two years after admitting breaching two counts of the ICC Anti-Corruption Code

May 29, 2019 byRandev No Comments
Australia’s disciplined bowling performance restricted Sri Lanka to 239-8, but they looked to have suffered a blow when Khawaja limped off after being hit on the knee while fielding.