MPs fail to back proposals again 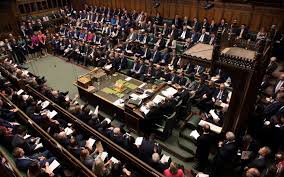 MPs have again failed to agree on proposals for the next steps in the Brexit process.

The Commons voted on four alternatives to Theresa May’s withdrawal deal, but none gained a majority. One Tory MP resigned the whip in frustration.

May will now hold a crucial cabinet meeting to decide what to do and whether to put her deal to MPs again.

The UK has until 12 April to either seek a longer extension from the EU or decide to leave without a deal.

The so-called indicative votes on Monday night were not legally binding, so the government would not have been forced to adopt the proposals. But they had been billed as the moment when Parliament might finally compromise.

May’s plan for the UK’s departure has been rejected by MPs three times.

As a result of that failure, she was forced to ask the EU to agree to postpone Brexit from the original date of 29 March.

Meanwhile, Parliament took control of the process away from the government in order to hold a series of votes designed to find an alternative way forward.

Last week, eight options were put to MPs, but none were able to command a majority, and on Monday night, a whittled down four were rejected too. They were:

Those pushing for a customs union argued that their option was defeated by the narrowest margin, only three votes.

It would see the UK remain in the same system of tariffs – taxes – on goods as the rest of the EU – potentially simplifying the issue of the Northern Ireland border, but preventing the UK from striking independent trade deals with other countries.

Those in favour of another EU referendum pointed out that the motion calling for that option received the most votes in favour, totalling 280.

Following the failure of his own motion, Common Market 2.0, Conservative former minister Nick Boles resigned from the party.

The MP for Grantham and Stamford said he could “no longer sit for this party”, adding: “I have done everything I can to find a compromise.”

As he left the Commons, MPs were heard shouting, “don’t go Nick”, while some MPs from other parties applauded him.

He later tweeted that he would remain an MP and sit in the Commons as “an Independent Progressive Conservative”.

Brexit Secretary Stephen Barclay said the “only option” left now was to find a way forward that allows the UK to leave the EU with a deal – and the only deal available was the prime minister’s.

If that could be done this week, he added, the UK could avoid having to take part in elections to the European Parliament in May.

Health Secretary Matt Hancock agreed it was time for May’s deal to be passed.

But Labour leader Jeremy Corbyn said that while it was “disappointing” that none of the proposals secured a majority, he said he wanted to remind the Commons that May’s deal had been “overwhelmingly rejected”.

He urged MPs to hold a third round of indicative votes on Wednesday in the hope that a majority could yet be found for a way forward.

For months, Parliament has been saying “Let us have a say, let us find the way forward,” but in the end they couldn’t quite do it. Parliament doesn’t know what it wants and we still have lots of different tribes and factions who aren’t willing to make peace.

That means that by the day, two things are becoming more likely. One, leaving the EU without a deal. And two, a general election, because we’re at an impasse.

One person who doesn’t think that would be a good idea is former Foreign Secretary and Brexiteer Boris Johnson.

He told me going to the polls would “solve nothing” and would “just infuriate people”. He also said that only somebody who “really believes in Brexit” should be in charge once Theresa May steps down. I wonder who that could be. (BBC)

IS group names Abu Ibrahim al-Hashemi as its new Leader

November 1, 2019 byTSM Web Desk No Comments
The jihadist group Islamic State (IS) has for the first time confirmed the death of its leader, Abu Bakr al-Baghdadi, and named his successor.