Many, including this author, have been less than enthusiastic about the Minister of Sports and Youth Affairs’ fondness for committees. That cynicism is the results of decades of government-appointed committees consisting of eminent individuals of every hue wasting public monies and goodwill to give cover to the person who appointed them through laborious and self-indulgent hearings to form conclusions that offer zilch added value.

And the answer to whatever that is to be followed is to ask Namal Rajapaksa to form another committee, you ask?

Yes, and I say we must be adamantly insistent on this committee. Read me out before flipping me the finger!

The committee I am insisting on is a committee to evaluate tenders. What tenders, you ask? The tenders that are likely to be called upon to meet the expanding demands of a ministry blessed with fatherly love to the tune of more than five billion rupees over the next four years. Add another two billion to that number if building walking paths are also the answerability of Namal Rajapaksa’s ministry. 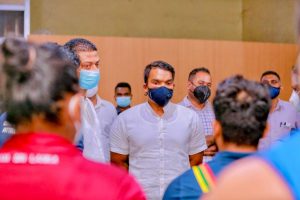 The 2021 budget calls for the establishment of ten sports schools, a modern sports city in Suriyawewa, laying of half a dozen or more synthetic tracks and doing the spade work required to make a credible bid for the 2032 Olympics.

That’s a lot of building. A lot of building that will require a massive number of quantity surveys to be evaluated; suppliers, builders, and services to be contacted and contracted; and financial negotiations to be concluded with lenders and so on.

Rupees five plus billion can spread a lot of good cheer, deny a lot of cheer to the unchosen, offer opportunities to earn a lot of commissions, offer decision-makers an opportunity to demand shares of those commissions.

Namal will break with sordid past…

All of the above-mentioned responsibilities have been bestowed on a ministry that according to an assessment done in 2019 by the organisation Budget Promises Beyond Parliament, that is among the worst in terms of transparency and accountability. The Ministry of Sports and Youth Affairs was declared a closed body, meaning it was not open to sharing information about its activities.

You’ll see where I am heading with this now, don’t you?

Of course, it is completely plausible that Namal Rajapaksa will break with the sordid past of his ministry and charter a new course replete with transparency and accountability at every turn.

Of course, it would also be completely natural to suspect that Namal Rajapaksa would be no different to the ministers who had come before him as well.

Considering, the public has no option but to demand that Namal Rajapaksa appoint an independent committee consisting of competent and experienced individuals to evaluate all the tenders that will be submitted to the Ministry of Sports and Youth Affairs in the course of the next four years.

Not just another committee, but a committee that is independent of the Minister and not beholden to the Minister.

September 26, 2018 byMalik No Comments
Derby County beat Manchester United 8-7 in a dramatic penalty shootout to settle a pulsating Carabao Cup tie at Old Trafford and send the Championship club through to the fourth round.