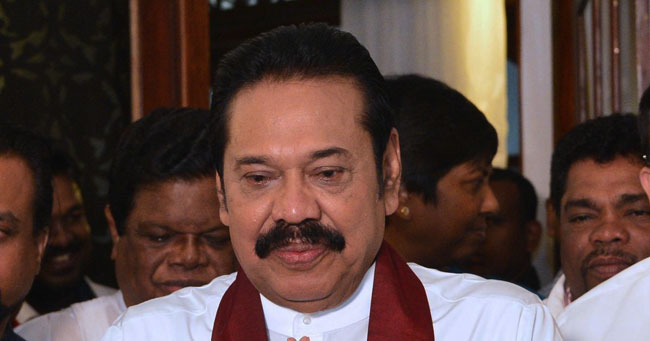 Opposition Leader Mahinda Rajapaksa is to take up the leadership of the Sri Lanka Podujana Peramuna this Sunday (11) despite the likelihood of him losing his Parliamentary Membership along with his post of the Leader of the Opposition.

Sri Lanka Podujana Peramuna member and former Minister of Economic Development, Basil Rajapaksa, addressing a media briefing today, said that the party would announce its new leader on Sunday during its national convention.

“We will be announcing our new Party leader at our Party convention. It will be former President and current Opposition leader Mahinda Rajapaksa,”

“He has been President, he has been the Prime Minister, the Opposition Leader and he has held various Ministerial portfolios. Losing his Parliamentary membership will not be an issue. It will not hinder his or our journey in any way,”

Furthermore, Rajapaksa said the SLPP would also be announcing its Presidential candidate on Sunday as well.

“Opposition Leader Mahinda Rajapaksa will be announcing our Presidential candidate during our party convention on Sunday,”

The SLPP national convention is to take place this Sunday at the Sugathadasa stadium.

May 26, 2019 bythemorninglk No Comments
Sri Lanka has proposed setting up a joint committee with Singapore to amend the controversial Free Trade Agreement (FTA).

July 25, 2019 byRandev No Comments
A three-member committee has been appointed to look into the statement made by State Minister Ranjan Ramanayake against some monks.