October 17, 2018 by The Sunday Morning No Comments 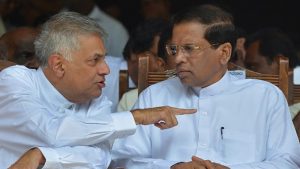 President Maithripala Sirisena and Prime Minister Ranil Wickremesinghe had clashed at the cabinet meeting yesterday on the East Terminal of the Colombo Port.

The Prime Minister had reportedly wanted the East Terminal to be given to India on a Public-Private Partnership (PPP) deal but the President had strongly objected.

The President is reported to have said that after giving the Hambantota Port to the Chinese he cannot agree to give a section of the Colombo Port to India.

He has said that he will have talks with India and resolve the issue.

Recently The Sunday Morning quoted the Minister of Ports and Shipping Mahinda Samarasinghe as saying that the East Terminal of the Colombo Port will begin operations under the Sri Lanka Ports Authority (SLPA) within the next few months.

“I have submitted a cabinet proposal to operationalise the East Terminal of the Colombo Port. There is heavy container ship traffic at the port, and only the terminal operated by the Chinese company, Colombo International Container Terminal, can handle deep water ships. We have had to delay docking of certain ships due to increased congestion. The East Terminal can handle deep water ships and would help lessen the container ship traffic,” the Minister had said.

He noted that the East Terminal must be operated solely by the Sri Lanka Ports Authority.

BOI to take action against HFZL

July 20, 2019 byRandev No Comments
The Board of Investment (BoI)  is to take stern action against Hayleys Free Zone Limited (HFZL) over the importation of contaminated materials.

UNP candidate within one and half weeks

August 29, 2019 byTSM Web Desk No Comments
The presidential candidate of the United National Party will declared within the next one and a half weeks, stated Minister Sujeewa Senasinghe.