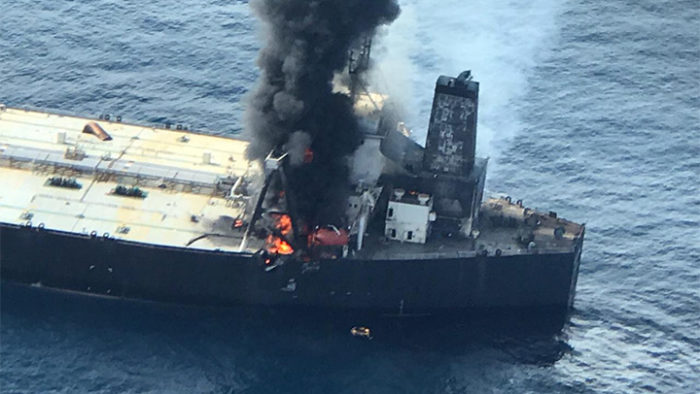 The Attorney General’s (AG) Department, after studying the Government Analyst’s Department’s report and other claims that were submitted by the Marine Environment Protection Authority (MEPA), yesterday (16) named an interim claim to New Shipping Ltd., the owners of MT New Diamond.

“We have named an interim claim of Rs. 340 million for the costs incurred by the Government of Sri Lanka for the firefighting and rescue efforts that were taken by the Sri Lanka Navy, the Sri Lanka Air Force, and other observation visits made by maritime authorities headed by the MEPA,” AG’s Co-ordinating Officer State Counsel Nishara Jayaratne said in a statement to the media.

In addition, AG Dappula de Livera had instructed the Criminal Investigation Department (CID) to report the facts that they have compiled at courts and to obtain a court order which instructs the ship’s captain to appear before courts under the charges of committing offences under the Marine Environment Protection Act.

The Government Analyst’s Department’s report indicated that the oil samples collected from the site of the oil slick that was trailing the MT New Diamond were bunker oil.

MEPA Chairperson Dharshani Lahandapura, speaking to The Morning, said: “The oil samples that were collected and sent for testing have returned and the results confirm that the oil slick was not from the crude oil that was transported onboard the distressed ship.”

The MEPA noted that the oil samples were collected from different areas of the oil slick to check whether there was any crude oil leakage, and were also retracted from different depths to analyse the impact the contents would cause in the long run to marine life.

The report had detected the substance to be bunker oil, commercially known as heavy petroleum distillate (HPD).

The team from MEPA had also taken crude oil samples and oil samples from the engine room from which the leak had originated at first after the firefighting had completed, for which separate tests were carried out to match against the sample reading from the oil slick.

The Indian Coast Guard last week had used oil dispersants to dissipate the oil slick when the oil slick started to visibly grow over an expanse of two nautical miles.

Meanwhile, the Sri Lanka Navy had deployed divers to inspect and capture images of the undersea events of the oil slick to document evidence.

HPD is known to be a general class of combustible liquids which include two parts of fuel oil and one part of diesel fuel. HPD is considered to be ignitable with a flash point between 100-200 degrees Fahrenheit.

The MEPA, as instructed by the AG’s Department, has now submitted all the necessary reports and documented evidence to support the case that is filed to claim compensation by the ship’s owner, New Shipping Ltd.

July 1, 2019 byRandev No Comments
President Maithripala Sirisena slammed the Government as well as the Opposition for opposing the implementation of the death penalty on serious offenders of illegal drug trafficking.