The Marine Environmental Protection Authority (MEPA) is to present the finalised claims documents over the bunker oil spill caused by the MT New Diamond crude oil tanker accident to the Attorney General’s (AG) Department on 15 December, The Morning learnt. 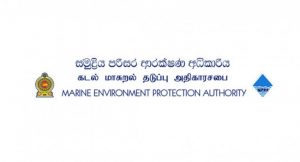 “Last week we met with the AG to obtain his legal counsel over the quantification report that we were preparing in relation to the MT New Diamond bunker oil spill incident. We are now in the process of revising the report to include the AG’s recommendations, and will have a completed report by 15 December to be submitted along with the claims documents,” MEPA Deputy General Manager A.J.M. Gunasekara told The Morning.

The report includes anticipated civil liabilities owing to the bunker oil spill that was caused by the MT New Diamond ship. In addition to that, costs that MEPA and the National Aquatic Resources Research and Development Agency (NARA) would incur for future monitoring exercise to assess the marine pollution impact the bunker oil spill has caused will also be added.

MEPA will work closely with NARA to conduct the routine sampling from the bunker oil spill site and observe the changes in marine life behaviour for the next three years.

MEPA also pointed out that should the shipping company agree to settle these out of court, then due procedure is to be followed. However, if the company decides to settle it through the legal framework, legal proceedings would ensue.

Moreover, MEPA had received Rs. 52 million out of the Rs. 442 million that was paid to the Sri Lankan Government as part of the payment has been received for the purpose of cleaning up activities, deployment of instruments to mitigate the bunker oil spill, and preliminary assessment of the bunker oil spill.

The bulk of the Rs. 442 million was allocated to the fire fighting and rescue operations that were carried out by multiple institutions as well as towards legal fees.

SLFP to decide on Budget vote this week

March 24, 2019 bythemorninglk No Comments
The Sri Lanka Freedom Party (SLFP) has not yet taken a decision on the final vote on the 2019 Budget, SLFP General Secretary Dayasiri Jayasekara said.