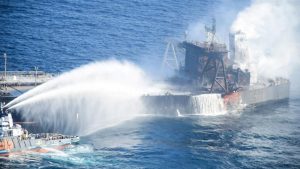 Sri Lanka stands to lose the opportunity of claiming one-fourth the value of the MT New Diamond and one-fourth the crude oil on board (67,500 metric tonnes) due to an oversight by Sri Lanka’s maritime authorities, The Sunday Morning learnt.

This is due to the maritime authorities allowing the ship to be towed out of Sri Lanka’s maritime borders into international waters in the rush to prevent an oil spill close to Sri Lanka.

Hence, the Merchant Shipping Secretariat, which is under the purview of the Ministry of Ports and Shipping, appears to have missed a golden opportunity by not acting swiftly. The cost of disaster management and firefighting by the Sri Lanka Air Force and Sri Lanka Navy can be claimed through insurance from New Shipping Ltd., the commercial owner of MT New Diamond in Athens, Greece.

However, the potential reward value of one-fourth of the ship and its goods cannot be claimed by Sri Lanka through insurance, and therefore, the Government has been denied a windfall. Speaking to The Sunday Morning, Independent Consultant for Marine Environment Protection Authority (MEPA) Maritime Lawyer Dr. Dan Malika Gunasekera laid the blame for the lost opportunity on Sri Lanka’s maritime authorities.

“The biggest mistake we have made is not obtaining the proper legal advice with regard to our maritime area. By the time the MEPA contacted me for legal advice, it was too late. They have consulted the Attorney General’s Department, which does not have expertise in this niche area. The salvors who take care of operations like this are entitled to a reward under the ‘no cure, no pay’ system. The reward is one-fourth the portion. However, what our country has performed is the role of a statutory salvor and not a contractual salvor, which is the party that has a contract with the owners to salvage the ship. The company that is appointed as the contractual salvor, MIT Singapore Pte Ltd has performed this role and therefore is entitled to the reward.”

When The Sunday Morning contacted Merchant Shipping Secretariat Director General A.W. Seneviratne, he said: “The salvage operation of the distressed ship has already commenced under the directives of New Shipping Ltd. The assigned company has now taken the responsibility over the salvage operations.”

When questioned about the International Maritime Law clause, Seneviratne continued to say that he is aware of the law, and continued to avoid responding to the question about the opportunity that Sri Lanka missed. Seneviratne referred The Sunday Morning to the Attorney General (AG)’s Department to obtain its legal opinion since the Merchant Shipping Secretariat too is acting according to the advice given by the AG’s Department.

The Merchant Shipping Secretariat is the shipping administration arm of Sri Lanka and has the overall responsibility to oversee maritime concerns.

When contacted, Cabinet Spokesman and Minister of Mass Media Keheliya Rambukwella conceded that Singapore had profited off Sri Lanka’s oversight. “I don’t have much of an idea about the mechanism that was employed. All I heard is that Singapore has got a good deal out of it,” he said, adding that the main focus of the Government at the time was on preventing an oil spill in Sri Lankan waters.”

Earlier on Friday (11), the Colombo Magistrate’s Court issued orders to the Criminal Investigation Department (CID) to obtain oil samples from the storage units of the MT New Diamond oil tanker and copies of the vessel’s data records, and to record statements from the 23 persons who were rescued from the tanker including the Captain of the ship.

Towards the latter part of the week, a narrow oil patch extending for one kilometre from the ship had been observed.

“Over the past few days, the firefighting teams continued to surge a sheer volume of seawater to extinguish the fire on board. As a result, the engine room of the ship was flooded with seawater, making it lie in a position called ‘trim by aft’,” Navy Spokesman Capt. Indika De Silva said.

The Sri Lanka Navy believes that the diesel that had been stored in ruptured tanks located close to the engine room would have mixed with the water that was used to douse the fire and spilt over due to the ship’s changing position.

However, the Sri Lanka Navy assured that the crude oil storage of the distressed ship was still safe from the fire and there was no danger of the ship leaking oil into the sea at the moment.

The Sri Lanka Navy, together with experts appointed for its salvage operation, was geared for a diving operation to inspect the underneath hull condition of the ship, following the court order.

“Discussions on legal aspects were held with the AG’s Department; while all the external authorities including the ownership of the MT New Diamond were informed to take the ship out of Sri Lankan waters,” MEPA Chairperson Darshani Lahandapura said.

Capt. De Silva noted on Friday (11) that the distressed vessel was located about 45 nautical miles off Point Kalmunai with continuous operations conducted amidst rough sea conditions.

March 10, 2019 bythemorninglk No Comments
A 37-year-old man identified as Mohomad Thaslim, a resident of Dhanagama, Mawanella was shot and injured yesterday at his residence.