In the green room after the Bahrain Grand Prix, Lewis Hamilton turned to Charles Leclerc, from whom the world champion had inherited victory when the Ferrari driver suffered an engine problem in the closing laps.

“You drove great this weekend, man,” Hamilton said. “You really drove fantastic. You’ve got a long old future ahead of you. I know it sucks in this moment but you’ve got a long, long way to go.” 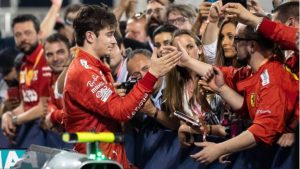 A few minutes earlier, after drawing to a halt in the pit lane, Leclerc had paused in the middle of hauling himself out of the car. He hung on to the halo head-protection device, his head low. He climbed out, despondent, took off his helmet, accepted the commiserations of his team-mate Sebastian Vettel. Leclerc put his hands over his face, composed himself, then, wearing a resigned expression, raised an arm to the cheers of the crowd.

The 21-year-old had just finished third, behind Hamilton and the other Mercedes of Valtteri Bottas. But everyone knew Leclerc was the moral winner. His consolation was two-fold – a late safety car had stopped him falling further down the field in the closing laps; and, just as importantly, he had driven in a manner which suggests the first win that should have come on Sunday will not be very far down the road.

It’s easy to slip into hyperbole at moments such as these, after a weekend in which one driver has so utterly dominated his rivals.

But it is not hyperbole to say that, over three days in Bahrain, Leclerc brushed away any doubts there may still have been that this is a man who will be at the centre of Formula 1 for many years to come.

“In Leclerc,” said Mercedes F1 boss Toto Wolff, “we are seeing a young champion in the making, who was the emotional winner today, fastest man in the fastest machine. He has got the cruel side of motor racing today and it was our fortune.”

A powerful statement of intent

Leclerc was class personified throughout the weekend in Bahrain. On track, he was ‘the man’ all weekend, taking pole from his four-time world champion team-mate by nearly 0.3secs, and then utterly dominating the race until his engine hit trouble with just over 10 laps to go.

His engineer told him the MGU-H – a key part of the engine’s hybrid system – had failed. Team boss Mattia Binotto later said this was not the case and that it was a cylinder problem.

His only real error was the poor start that dropped him to third place on the first lap. But after that he was like a tiger chasing down a deer.

Bottas was dispatched at the start of the second lap, after the Finn was caught out by the wind and braked too late for Turn One.

That left only Vettel ahead. In two laps, Leclerc cut Vettel’s two-second lead in half, then went on the radio to tell his team, as if they hadn’t noticed, “Guys, I’m much faster.”

“I was just letting them know,” Leclerc said after the race. “I had an answer, and they said: ‘Stay like this for two laps.’ But I had an opportunity on the next lap.” 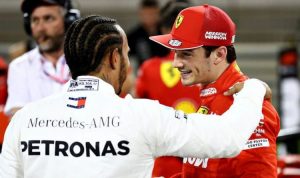 Leclerc passed Vettel around the outside of Turn Four and with that, he was gone. Into a race of his own, that should have led to his maiden grand prix victory, in only his second race for Ferrari, at the start of only his second season in F1, had it not been for that engine.

“Oh, God,” he had said on the radio, as he realised the win was going to slip from his grasp, his engine robbed of enough power to cut his straight-line speeds by 40km/h. But then nothing but steely focus on trying to limit the losses.

“It is a shame to lose the lead in this way,” he said, “but I had a lot of things to do. So I very quickly got back to focus on my race. The win was out of reach but there was still very important points to gain, focus, leave the disappointment on one side.”

Luck, which had deserted him when he was leading, came to Leclerc’s rescue. He had lost second to Hamilton’s team-mate Valtteri Bottas and was about to lose third to Red Bull’s Max Verstappen. But then the two Renaults broke down on the same lap. The safety car was deployed, and the race, neutralised, finished under it.

It was a first podium – scant consolation when what should have been a maiden win had gone begging, but consolation nonetheless.

“From the whole weekend, there are a lot of positives to take,” Leclerc said. “In Australia (at the first race of the season), we were quite a long way off. We found some answers. The team did a great job between the two races and we have shown also we had very strong pace during the race.

“Issues always happen in a season and if any time I have an issue I finish third, I can be quite happy. Today was not our day. It is sad. I was so close to realising a dream. But hopefully this day will come one day in the future.”

“Very, very impressive,” Wolff said. “He has a good personality. He is a humble young man and he is very fast. To have the combination of the speed, the personality and being able to tamper your emotions in both directions is a great ingredient.

“I know many other drivers who have the lion in them – as he has – would have reacted in a different way and been angry and would have displayed that. And we didn’t see that with Charles.”

Hamilton added: “Charles did an incredible job this weekend and has a bright future ahead of him. This will only make him stronger.” (BBC)

November 5, 2018 byRevatha No Comments
Former Australia captain Mark Taylor has resigned from his position as a Cricket Australia Board director as the bloodletting continues in the wake of the cultural reviews