High-rise condominium complexes continued to sprout in Colombo unabated over the last decade to compensate for a lack of space for the city’s rapidly growing population, bringing to the fore public concerns about the rules and their safety.

While some see high-rises as symbols of growth and modernity, critics say an unchecked building brings with it problems such as traffic congestion, waste management issues, and potential damage from disasters like fires as some builders cut corners, compromising on ethics, safety, legality, and transparency, thereby harming the locals living in the city for many years.

Mount Lavinia is just one such area that faces a dilemma as a result of the increased construction of high-rise buildings, which go unregulated.

Speaking to The Sunday Morning, Mount Lavinia Residents’ Association (MLRA) President Kishan Ratnayake said that approximately 34 buildings were being built in Mt. Lavinia at the end of 2017.

“Since 2014, approvals have been given without considering the interests of local residents. In some areas, there are massive buildings being developed in the middle of two residential houses.

“They buy a small block of land (17 or 18 perches) and put up an entire apartment complex,” he stressed.

“Many apartment complexes were approved for construction, which contravened Urban Development Authority (UDA) regulations. When the width of the road is less than six metres and you can only build up to three floors, the municipality at that time granted permission to build more floors,” Ratnayake alleged.

“Even though the builders call these housing developments, we prefer the term buildings. These in no way contribute to any form of development or enhance the area’s attractiveness, it only creates a burden. If it is a development, it should be put up together with a children’s playground, recreational facilities, etc.,” he said. 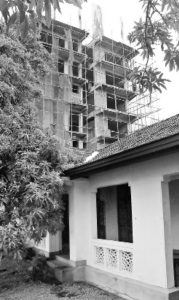 Explaining the reasons behind their opposition to the unregulated condominiums, he said: “There are three schools in these areas and there’s heavy traffic during school opening and closing times. When the local population increases suddenly due to this large number of apartments being constructed, it creates a burden on the local infrastructure; the sewage system, drains, road, water, electricity, etc.”

“Our other fear is that I don’t think these complexes have the necessary approval from the Fire Department, because if there’s a fire, access to the building from the rear is not possible; that has not been taken into consideration by these so-called developers,” Ratnayake stressed.

According to MLRA, the relevant authorities had failed to provide a proper solution to this issue.

“We’ve been raising this issue with the municipality and subsequently, the UDA took over the approval process, and we discussed the issue with Megapolis and Western Development Minister Patali Champika Ranawaka and UDA officials. However, the issue has not yet been addressed in any significant manner by the authority. They just continue to provide approvals. There could be an element of corruption.

“After the UDA took control over the approval process on 1 February 2017, they conducted a survey. We also assisted them in getting the necessary details for the survey from the area. However, we never got a copy of the survey and there was no action taken after it either,” he added.

The Sunday Morning learnt that there are around 10 such associations following in the footsteps of the MLRA, working to protect the rights of local residents in other areas as well, including Dehiwala, Kotte, Wellawatta, Kirulapone, and Borella. These associations were formed by residents in the area who were affected as a result of these unregulated condominiums.

To date, there have been no reports made in Sri Lanka pertaining to any major disasters or occurrences as a result of these high-rise condominiums, although social problems continue.

A condominium,“condo” in short, is a private residence owned by an individual or family in a building or community with multiple units. A feature common among all condos is that they share common areas – yards, garages, recreational rooms, gyms, etc. – with other units. These common areas don’t need to be maintained by the condo owners, making upkeep that much easier. Usually, each condo unit has a separate owner.

On the other hand, apartments are the rental units in a building that are usually owned by one individual or corporation. These buildings are often managed by a professional company or the owner.

The similarity is that condos are also part of buildings with multiple units, but each unit is typically owned by a different individual. Even though the differences between condos and apartments are slight, both these structures absorb a large number of tenants, and as a result, the development of such buildings directly affects the social structure of the area.

For example, when a road is only used by 10 families, and the development of a condominium or apartment leads to an addition of approximately around 50 families – the final figure would depend on the number of units in the building of course – the entire infrastructure of the area in which it is situated is affected.

This is the reason behind the imposition of strict regulations for the developers to comply to, in order to control such negative impacts.

However, the main question is not with regard to the housing development projects but rather with the irregularities that occurred when they were approved.

Meanwhile, responding to the allegations levelled against the UDA that it had given approvals by violating the regulations, UDA Director General Eng. S.S.P. Rathnayake told The Sunday Morning that the authority had taken over the power to give approval from local authorities in 2017, after which they had strictly adhered to the rules.

“But there were some development permits that were issued before that, in which there are some violations.Whenever people complain to us, we take action. But when a permit was issued by a local authority or someone who had power at that time, we are unable to cancel that permit.

“Even if we go to court, the court also rejects these cases, stating that the developers have legal permits. But after 2017, we are strictly adhering to the rules. We did not issue any approvals that violated regulations,” Rathnayake stressed.

Highlighting the process of issuing permits, he said: “When issuing development permits, to ensure transparency even at the preliminary planning stage, we ask the developers to submit all the documents to us.

“If they do not submit the relevant approvals from other authorities, documentation, TIAs that are done by specialised qualified people, etc., we do not approve any projects.

The DG requested that residents who believe there could be violations lodge complaints at the UDA, and stressed that if the people were to point out the projects which lacked these permits, the UDA could answer them.

When The Sunday Morning contacted Condominium Property Developers Association (CPDA) President Pradeep Corea to ascertain the extent of their involvement in overseeing the issues raised by the residents against some of the property developers, he said that the CPDA was not a monitoring body and therefore, monitoring irregularities was not in its mandate.

“We are trying to adopt best practices and do something for the industry. If something is brought to our notice and if it’s one of our members, we will then make recommendations to some degree or counter by getting them to be accountable for whatever they did wrong. That is the maximum we can do,” Corea stressed.

According to him, there are 38 members registered with the CPDA.

Meanwhile, Condominium Management Authority (CMA) Chairman C.A. Wijeyewere said his authority is responsible for the management of the condominiums that have been completed.

“The construction part of the condos is covered by the CMA, and when the Certificate of Conformity (CoC) is issued, the original approval plans relating to the building and transport are given, and all certificates and deeds are registered; then the CMA advises them on the property management aspect of it,” he said.

“The CoC should not be given if they don’t conform to the existing regulations. Once the UDA or the local authority issues the certificate, we have no other option. We presume everything is in order,” Wijeyewere added.

“My initial concern is that I don’t have the authority. Secondly, even if I go out of my way to spot any violations and point them out as wrong and in turn recommended the certificate not be issued, people think that the CMA is trying to get a bribe,” he said.

The CMA stated that it had already suggested some amendments to the existing laws pertaining to condominiums. However, he added that the UDA was currently studying those amendments, to the best of their knowledge.

June 14, 2020 bySarah Hannan No Comments
With the Covid-19 pandemic still posing the threat of a second wave in the country, the Government’s decision to resume socioeconomic activities is still being criticised.

June 7, 2020 bySarah Hannan No Comments
Prior to Covid-19, Sri Lanka struggled with managing its clinical waste with illegal and irresponsible dumping observed on several occasions with outsourced private companies failing to adhere.