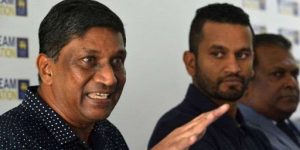 Sri Lanka Cricket (SLC) announced on Friday (4) the appointment of the following members to the seven-member new panel of the National Selection Committee. The names have been ratified by the Minister of Youth Affairs and Sports Namal Rajapaksa.

De Mel headed the previous committee as well while Mendis too was one of its members. The third member of the previous panel, Vinothen John, has been omitted.

The same panel is to make the selections for the Sri Lanka Women’s as well as the boys’ Under-19 team.

The naming of the National Selection Committee had been delayed unexpectedly since mid August this year as the names nominated by SLC took time to get the needed ministerial ratification, it was reported.

Sri Lanka suffered in SA due to injury bug?

December 30, 2020 byRevatha No Comments
Suffer an innings defeat at Centurion in an unexpected manner

KJP out of SA ODI series due to injury!