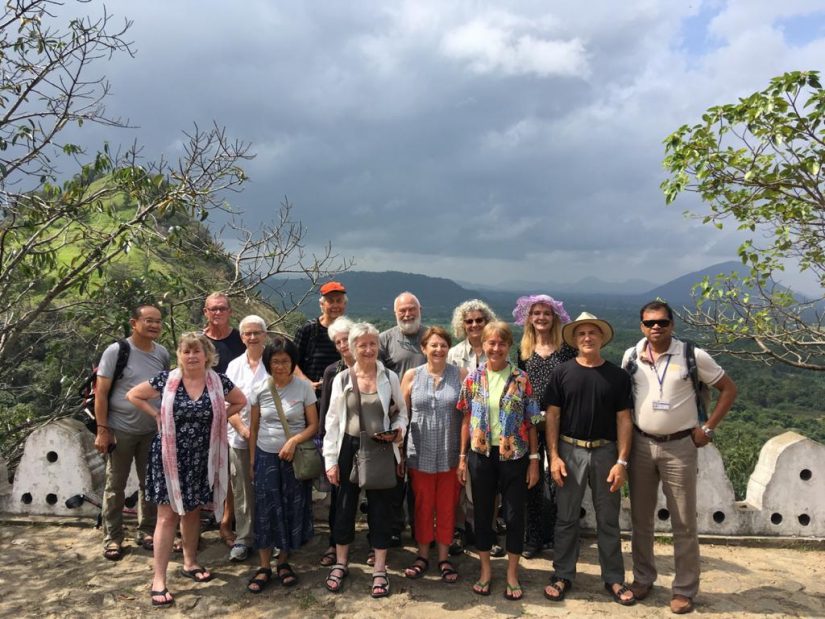 At the turn of the second week since state and private companies restarted operations under strict health guidelines to power up the country’s economy, most of us are easing into normalcy; some have the good fortune of being able to return to the jobs they had prior to when the pandemic started to barricade people’s day-to-day lives.

Although the Government seems to be positive that the industry can get moving from July onwards, inbound tour guides and ticketing agents are sceptical. At present, a flight ticket is costing nearly three times the normal price and if one decides to travel after border restrictions are relaxed; they will still have to undergo a 14-day quarantine period at their arrival destination, that too costing a considerable amount.

By the time Sri Lanka detected its first local Covid-19 patient, tour groups were in the midst of completing their travel itineraries. Manoj Maddage, a National Tourist Guide Lecturer (NTGL) who is also the President of the Tourism Organisation of Professionals (TOP), was travelling with a group and he recalls how the group observed how quickly the warm hospitality afforded by all Sri Lankans turned into hostility.

“I was handling a tour group who finished their travel itinerary on 18 March, just before the country imposed travel restrictions. Their last week of travel was quite challenging. While the establishments on our itinerary did their very best to entertain the needs of the group, the rest of the country started looking at all foreigners as Covid-19 carriers,” Maddage noted.

They had to do away with pitstops for toilet breaks as many did not even allow the group to use the washroom facilities. Similarly, Maddage suggested that there is going to be a lot of social aggression and aversion if and when leisure travel is allowed again.

“Even if we are positive that the industry can commence operations in July, we will not be able to attract the high-spending tour groups. Solo travellers are not keen on staying in a single place for a long time and with the new health guidelines, they will not be interested in travelling to another country to be placed under 14 days of quarantine.”

According to Maddage, the tour groups that are willing to stay put in one place and explore the surroundings are most often made up of senior travellers. He believes that following the pandemic, most of these senior travellers have now been advised to do away with their travel plans.

“Our organisation’s members are constantly communicating with international outbound tour guides and we are told that most of the countries are not looking to open their borders for leisure travel at least till September 2021, which means we too will have to wait for over a year to be able to receive foreign tourists.”

No relief so far

While everything is on hold, the tourism industry is going to suffer further due to the loss of business over the coming months. We asked Maddage whether their members have reached out to financial institutions to obtain the relief loans that are on offer.

“Independent tour guides are unable to obtain even a soft loan as they regard our profession as unstable. Therefore, they refuse to provide loans as we are unable to provide guarantors or an asset as security that the banks could hold against the loans that are offered.

“We have requested the Government and the Sri Lanka Tourist Development Authority (SLTDA), with whom we are registered as national tour guides, to arrange for our members to obtain such loans,” Maddage responded.

One tour group who travels to Sri Lanka on a 7-day itinerary is capable of bringing in an estimated revenue of  Rs. 3-4 million to the country, Maddage revealed. Therefore, they affirm that if the banks approve and issue them a soft loan of Rs. 1 million, they are able to pay it back once international travel and tourism reopens.  TOP had recently written to President Gotabaya Rajapaksa to explain how their organisation’s members are facing financial difficulties along with suggestions to revive tourism amid the Covid-19 pandemic.

“A national tour guide is singly responsible for the total organisation and programme schedule of a given trip. Working as informal ambassadors of the country, they indeed contribute immensely not only to its reputation as a perfect and beautiful country but also to bring in foreign exchange revenue for the state,” Maddage stated.

As Maddage explained, the job of an NTGL takes them to all parts of Sri Lanka and many local service providers depend on the tourist guides’ groups to earn their sustenance. They have thereby also forged strong friendships, rapports, and economic bonds with Sri Lankans from all walks of life.

“Following the tragic terrorist attack on Easter Sunday, April 2019, the national tour guides appealed to the then Government (SLTDA) for redress and financial help as they were without employment and an income. TOP noted that their response was to show total disinterest and disregard.

“Adding insult to injury, they responded with a plan to aid whom they considered ‘tourism minions’, referring to us derogatorily as ‘tourism poddu’. None of the promises in this plan were implemented; we were left helpless once again,” Maddage revealed.

Following this incident, on 6 May 2019, TOP had met with the then Opposition Leader and the present Prime Minister of the country Mahinda Rajapaksa, who was concerned of the organisation’s predicament and promised to grant them relief later on.

Impressed with the objectives of Viyath Maga to put Sri Lanka Tourism back on the map with its strong support base of professionals, national tour guides said they worked hard among themselves and urged many others whom they came into contact with, to vote for the present leader’s success.

TOP noted that the national tour guides play a pivotal role in tourism and that their members are educated, qualified, and talented, and work tirelessly in an industry that brings in considerable foreign exchange and employs several other Sri Lankans either directly or indirectly. They also requested prompt attention to the matters they cited, to bring their members redress and relief.

The livelihoods of the following service providers in the tourism industry have also been severely affected by the Covid-19 outbreak. They include those who directly or indirectly earn their living by occupation in the tourist industry viz. bus drivers, chauffer guide drivers, taxi drivers, wildlife jeep service drivers, boat safari staff, small and medium enterprises in tourist areas, restaurant staff, and hotel staff. TOP believes that it is imperative that the Government seeks to offer them financial redress till tourism is revived again.

Request for Covid-19 relief to NTGLs

3. Grant a grace period of two-five years to repay the loan

4. The above relief package to be provided on the guarantee of the Chairman of the SLTDA and on the production of the valid NTGL license

Proposals by NTGLs on tourism revival after Covid-19

1. Advice by NTGLs through media and create awareness on the new preventive and safety methods adopted for tourists and people associated with them

2. Employ the NTGLs to improve the tourist products for domestic and international tourists

3. Engage the NTGLs in mass and social media to showcase Sri Lanka as a destination for international tourists

4. Implement projects with the help of NTGLs to promote other lesser-known and visited cultural sites

5. Implement projects with the NTGLs to educate and train locals who seek employment in tourism in their provincial areas

6. Promote indigenous medicine within the districts as an arm of medical tourism

May 27, 2019 bythemorninglk No Comments
The Tamil political prisoner issue has stalled once again, resulting in concerns being raised within the Tamil National Alliance (TNA) over the deafening silence of its own party leadership.

September 22, 2019 byThe Sunday Morning No Comments
Sri Lanka is under the scanner of the European Union (EU) over its implementation of key conventions linked to the Generalised Scheme of Preferences (GSP) Plus trade concession and overall steps taken