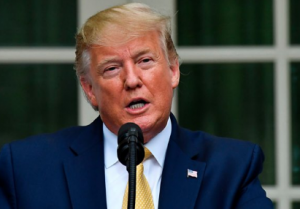 US President Donald Trump has accused his French counterpart Emmanuel Macron of being “nasty” for saying Nato was “brain dead”.

Trump is in London for a summit marking the Western military alliance’s 70th anniversary.

He also said he could see France “breaking off” from Nato, but did not explain why.

Nato – the North Atlantic Treaty Organisation – was founded after World War Two to counter the threat of Soviet expansion. The 29 member states pledge to come to the aid of one another should any come under attack.

But speaking last month,  Macron complained that Nato members were no longer co-operating on key issues.

He described the alliance as “brain dead”, stressing what he saw as a waning commitment from its biggest guarantor – the US.

The summit, due to get under way later on Tuesday, has already been overshadowed by a bitter row between member states France and Turkey, and a continuing debate over money.

Turkish President Recep Tayyip Erdogan has said he will oppose Nato’s plan for the defence of the Baltic region if it does not back Turkey over its fight against Kurdish groups it considers terrorists.

October 8, 2019 byTSM Web Desk No Comments
The US has blacklisted 28 Chinese organisations for their alleged involvement in abuses against ethnic Uighurs in China's Xinjiang province.

September 19, 2018 byMalik No Comments
China has hit back at President Donald Trump by imposing new trade tariffs on $ 60bn of American goods.