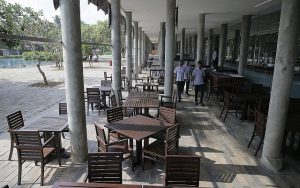 Nearly 10 hotels have shut down due to the non-arrival of tourists since the Easter attacks in April, the Hotels Association of Sri Lanka (THASL) said.

THASL President Sanath Ukwatte told The Sunday Morning that most hotels were facing difficulties following the terrorist attacks in April and as a result, some of the hotels had no choice but to close down but continue to pay salaries to the staff.

“Even though tourists are arriving from countries like Canada and the UK, most of them are Sri Lankans living in those countries and are coming down to Sri Lanka because of the discounted rates,” he stressed.

“Hotels can’t survive on these low rates. Unlike other companies, hotels provide meals for their staff and most of the hotels have asked the staff to stay at home as they are unable to give free meals. You can’t take away these privileges from the staff and even if the hotels terminate their contracts, what would they do?” Ukwatte added.

The THASL President also alleged that a moratorium offered by the Government was helping the industry but soft loans requested by the hotels had not yet been paid.

When contacted, Sri Lanka Tourism Development Authority (SLTDA) Director General Upali Ratnayake said that a discussion was held on Friday during which the Central Bank agreed to summon all the CEOs of the private banks and commercial non-banking organisations to further discuss the issues of providing facilities.

“What the Government has suggested is that the Enterprise Sri Lanka loan is for working capital. Unfortunately, only four banks including two private and state banks are offering it. So our problem is with those who are dealing with other private banks. These are things that we need to further discuss,” Ratnayake said.

Highlighting the situation of tourist arrivals, he stressed that it had shown a positive trend compared to last month and the hotels had some bookings.

September 4, 2018 byEaswaran No Comments
US Defence Secretary James Mattis has been warned over the possible threat the Hambantota Port can pose if it is used by China as a Navy base.