New Central Bank Act on the back burner?

– No discussions about Treasury Secretary yet 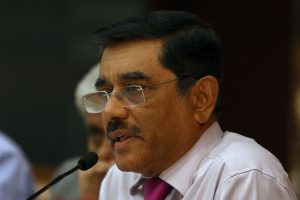 The Central Bank Bill, which was set to replace the 70-year-old Monetary Law Act, is yet to be considered by the new Government, according to the Central Bank of Sri Lanka (CBSL).

Addressing the press briefing of the eighth and final Monetary Policy Review of 2019, CBSL Senior Deputy Governor Dr. P. Nandalal Weerasinghe said that the Government has not had the time to review and discuss it.

“That has not been discussed yet. The Government has not even considered or looked at the Bill. It was during the tenure of the previous Government that it was submitted to Parliament. The new Government is still in the process of setting down things and we haven’t had any opportunity to discuss the new Government’s views on that,” he noted.

The Bill had been drafted to strengthen the independence of the Central Bank and submitted to Parliament following approval of the previous Cabinet. However, Dr. Weerasinghe said that this process would have to be followed again in light of the changes since.

“The Bill was drafted and submitted to the previous Parliament. Now the Parliament has been prorogued, so the process will have to restart from the Cabinet. The new Government will have to look at the Bill and determine if it needs amendments or should proceed as it is,” he added.

However, he further added that many of the reforms proposed in the Bill were being adhered to by the Central Bank even at present.

“A lot of the reforms suggested were mainly to institutionalise what we were already doing. For example, we have been following the Flexible Inflation Targeting (FIT) framework for the last several years, and we will keep following it. The only thing that will be delayed is the governance structure, which will only come into place when the Bill is enacted.”

The new governance structure would see the Central Bank’s existing Monetary Board, which oversees the institution’s activities, being bifurcated or broken up into two separate boards, namely the Monetary Board and a new Governing Board.

The Governing Board will be responsible for overseeing the administration and management of the affairs of the Central Bank and the determination of the general policy of the Central Bank for all of CBSL’s activities excluding monetary policy decisions, according to the draft Bill.

The Monetary Board will be solely responsible for monetary policy formulation and implementation of the flexible exchange rate regime in line with the flexible inflation targeting framework. Neither the Treasury Secretary nor any member of the Government would be members of the Monetary Board.

However, the Secretary to the Treasury can still be a member of the Governing Board.

“The Governing Board shall consist of the Secretary to the Treasury, Governor of the Central Bank, who shall be the Chairperson of the Governing Board, and three members who shall have expertise in economics, banking, finance, accounting and auditing, law, and risk management,” the Bill further notes.

The second major change that would be brought about is that the CBSL would not be allowed to participate in primary auctions. “The Central Bank shall not purchase securities issued by the government, by any government-owned entity, or any other public entity in the primary market,” the Bill states.

“This would prevent the Central Bank from participating in primary auctions that take out high-powered money in the most inflationary form of financing off the budget. It leads Balance of Payments (BOP) pressure, inflation pressure, and asset bubbles. It is really not a good thing and by law, the Central Bank will be able to do away with that,” noted former CBSL Governor Dr. Indrajit Coomaraswamy at his final Monetary Policy Review press briefing in late November.

The third change would be the addition of economic growth to the list of objectives of the CBSL. Currently, the CBSL’s two primary objectives are economic and price stability and financial system stability. However, under the amended draft Bill, the CBSL would also have to ensure its monetary policy is geared towards gross domestic product (GDP) growth, which goes beyond economic stability.

As reported by The Sunday Morning Business on 15 September, the Parliamentary Committee on Public Finance, which was reviewing the new Act, was sharply divided on the proposal to remove the Treasury Secretary from the Monetary Board of the CBSL. Parliamentarians Bimal Rathnayake, representing the Janatha Vimukthi Peramuna (JVP), and Bandula Gunawardana, representing the “Joint Opposition” at the time in the committee, opposed the move.

“The Central Bank shall not purchase securities issued by the Government, by any Government-owned entity, or any other public entity in the primary market,” the bill states.

May 14, 2020 byCharindra No Comments
In order to overcome the impact of the prevailing Covid-19 pandemic, First Capital Holdings CEO believes the Government should facilitate domestic investments into high-tech and manufacturing sectors.