January 27, 2020 by themorninglk No Comments

– Manil Jayesinghe takes over the reins from Jagath Perera 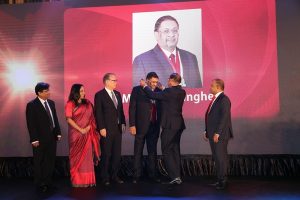 Manil Jayesinghe takes over the reins from Jagath Perera

Having been in service to the public for around 60 years, the Institute of Chartered Accountants of Sri Lanka (CA Sri Lanka) inducted their 25th President, Manil Jayesinghe, last week.

Jayesinghe took the reigns over from former President Jagath Perera, after having been a part of the CA Sri Lanka council for six years and the institute’s Vice President from 2018 to 2019.

The ceremony was held under the patronage of Dr. In-Ki Joo, President of the International Federation of Accountants (IFAC), the global organisation of the accounting profession, who graced the event as the Chief Guest.

Jayesinghe took to the stage to speak about the institute’s goals for the year 2020.

According to Jayesinghe, the new decade brings with it its own set of challenges, such as the ones stemming from the period of low economic growth the world is facing, those emanating from information technology, increased influence of the public sector, and challenges placed on ethical behaviour.

Therefore, in order to create a healthy accounting profession and add value to create the greatest impact on the economy, he believes in the need to upskill the current members of CA Sri Lanka who are already in the market.

“We have developed a new syllabus which will continue to make sure that the chartered accountants we produce will be future-proof. However, we also need to address our current membership, so we believe we have to invest in the development of our members so that they are future-ready and able to navigate the so-called Fourth Industrial Revolution by adding value to businesses and economies.”

Jayesinghe stated that with the presence of concepts like AI, blockchain, and cybersecurity, data will become doubly important as it will help transition the members of the profession to become future-ready finance professionals. In order to equip their members and keep their relevancy in the market, he stated that CA Sri Lanka intends to enhance their competency around data governance, data analytics, and the use of applied analytics with AI to help develop better insights into businesses.

“Data is currently the world’s most important resource; however, data on its own has very limited utility. Professional accountants are the ones with core fundamental skills and knowledge to navigate these data complexities, process its attributes, and see its value.”

Jayesinghe explained that they will start by implementing continuing professional development (CPD) programmes that are geared towards upskilling their membership and will be delivered through the use of technology.

He went on to state that human intelligence skills will make a huge difference in the changing world, and in order to embrace these changes, professionals have to be agile, develop critical problem-solving skills, and emotional intelligence.

“We plan to equip our members with these critical skills through enhanced and relevant CPD programmes through web-based platforms and other technologies.”

He stated that these programmes will also promote better participation in the membership, as they feel the need for more engagement.

Speaking on ethics, Jayesinghe emphasised the need to strengthen the ethical framework of the accounting profession in order to uphold the public’s trust in them during this age of change. This will include the creation of a helpful structure to aid members navigate through difficult ethical issues they may face.

“Our members are our brand ambassadors and we look forward to strengthening their standing both locally and globally.”

He stated that they also plan on enhancing their global mobility, which will result in their members having greater professional opportunities. In order to achieve this goal, he explained that they will not only use their regional and international affiliations to promote themselves, but will also take it a step further by entering into a Memorandum of Understanding (MoU) to give their chartered accountants better access to the international market.

“We have already done some landmark agreements and we plan on continuing to do so to give our members a global reach. We have already set up chapters in countries like Bahrain, Qatar, and Kuwait, where we have a large concentration of members, and we will continue to open more chapters in more countries, where we see a large concentration of our members, to help them continuously network and upskill.”

Jayesinghe stated that in order to grow their membership, they must grow the demand for chartered accountants, improve market acceptance, maintain a healthy pipeline to satisfy the market need, and keep the CA Sri Lanka brand relevant in marketplaces. To achieve this goal, he stated that they need to have a world-class technical unit, so that the market may leverage on it and gain solutions to challenges Sri Lanka faces as an economy as well as a country.

Jayesinghe explained that the institute also plans on strengthening their research capabilities as the profession, as a whole, does not carry out enough research to feed back into their practices.

“We plan to create this loop. We have already started doing research three or four years ago, and now its gathering steam. Last year, we had the research conference where we got to see some very interesting findings; we used these findings to reach out to the stakeholders and the Government to add value to society.” 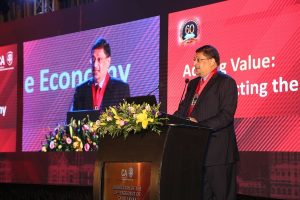 Speaking of the public sector, Jayesinghe stated that state-owned enterprises (SOEs) are an integral part of an economy, involving 54 of the most prevalent strategic sectors in Sri Lanka like energy, water, and insurance. Due to their high level of presence, these sectors contribute to the economy’s needs and need to have significant financial transformation to improve reporting, governance, and financial management. In order to aid this transformation, he stated that the institute will be proactively engaging with the Government.

“These 54 SOEs have an asset base of Rs. 8,204 billion, so it is a critical sector. As an institute, we identified this some time back and created the public sector wing, which will produce accountants relevant to the public sector.”

Delving into small and medium-sized enterprises (SMEs), Jayesinghe explained that they contribute around 52% of GDP of the country and is another critical sector that the institute has been focusing on for several years. Having introduced a tier-based qualification, he stated that they facilitate producing mid-level qualified accountants with the right skill sets to serve the SME market and contribute towards its growth.

“We have also been upskilling our members who are SME practitioners to enable them to provide high-quality assurance and other services required by SMEs such as financial management. We hope to continue and strengthen efforts to contribute to the robust growth of the sector.”

Finally Jayesinghe stated that the institute is taking steps to uphold both gender and intergenerational parity. He went on to state that Sri Lanka currently only has a 35% female participation in the workforce, while CA Sri Lanka has a 71% female participation, with even the council consisting of three members.

He explained that they have also taken steps to include gender parity in their annual report awards by having corporates disclose their gender parity policies.

“We hope this will encourage corporates to evaluate and improve where needed to bring in gender parity, recognising the fact that 52% of Sri Lanka’s population is female.”

With regard to intergenerational parity, he stated that they will be working with generations with different work ethics and skill levels, and will actively focus on how to best use the specific skills possessed by each generation, helping them work as a team and bring the best value for the economy.

Prior to Jayesinghe’s speech, outgoing President Jagath Perera addressed the gathering and highlighted the achievements of CA Sri Lanka during his presidency and the challenges faced by it.

Perera stated that he classifies the challenges they faced into three areas: Technological, regulatory, and globalisation.

“We are experiencing the Forth Industrial Revolution, and we need to embrace technology and digitisation. Then audit and accountancy professions are challenged by the regulations, and we need to continuously update. Finally, the fabric of globalisation is covering all the industries across the board.”

Perera explained that what they learn yesterday might not be sufficient today, therefore professionals need to unlearn, relearn, and then upscale, making sure members are ready for future challenges.

In order to be a catalyst in the Sri Lankan industry, Perera stated that he proposed three focus areas: Excellence in education and professional development, leadership and entrepreneurship, and upholding standards.

Based on this, strategic initiatives were identified and implemented during the last two years. The organisation structure of CA Sri Lanka was revised and divided into three main areas, which include engagement of students, strategic business niches like accounting, taxation, business, and IT schools, and finally the support services.

Perera stated that the institute is currently going down that path and have managed to identify the separation of the four schools, while other accounting and administrative changes are taking place in due course.

Taking the first focus area of education and professional development into consideration, Perera stated that they reached out to all their foreign missions through the Ministry of Foreign Affairs in order to showcase a study done by a member, titled “Increased Awareness on Benchmarking”, to make sure their members gain international recognition.

The second action he took during his presidency was to expand the MoUs and mutual recognition agreements (MRAs) the institute has with other professional accountancy organisations. He stated that they managed to enter into a separate MoU with CA Australia and New Zealand, where their members will be able to get membership with minimum work. They have also already signed a MoU with the American Institute of Certified Public Accountants (AICPA), with the pathways currently undergoing discussions.

He also stated that they went on to get into a MoU with Zambia Institute of Chartered Accountants where members will be able to obtain membership much easier.

Perera stated that another milestone was the dual membership for CA Sri Lanka students with ICA England and Wales to ensure that they will be able to get membership in both institutes by sitting only for three papers at the final level.

Another action taken during his presidency was converting their students to a single medium, which he stated was a difficult proposal that was done without dropping any students. With this, three out of the four levels will be conducted in English medium.

He explained that the new curriculum they came up with for 2020 has six areas of specialisation in addition to the normal examination structure.

Another area under this is women leadership, where the institute has now launched a database of board-ready members for the corporates.

According to Perera, the institute also focused on contributing to uproot corruption. In this context, the institute has already set up a forensic accounting faculty, and they are currently working with the Commission to Investigate Allegations of Bribery or Corruption.

“We contributed a lot to develop the national action plan on anti-corruption and we are now discussing on how to work together to support the awareness and education of our people.”

Taking the final focus area of upholding standards into account, Perera stated that they managed to bring the Institute of Certified Management Accountants (CMA) of Sri Lanka and the Association of Accounting Technicians (AAT) Sri Lanka to one platform, and are currently all working together very closely.

CA Sri Lanka’s current membership is at 6,000, having produced professionals who have reached the highest echelons of the economy, from governors of Central Bank to chairpersons and some who have become successful finance professionals.

June 26, 2019 byCharindra No Comments
John Keells Properties announced today that the piling work for its newest residential development TRI-ZEN, has officially been completed.

March 29, 2020 byCharindra No Comments
The Export Development Board (EDB) last week requested the President to extend the six-month debt moratorium to cover all export sectors and also to provide working capital facilities for businesses.