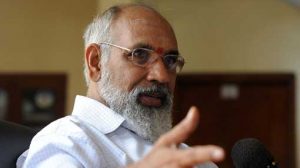 The new Tamil alliance formed under the leadership of former Northern Province Chief Minister C.V. Wigneswaran has been placed under close scrutiny by defence officials over fears the alliance may align itself with hardline Tamil Diaspora groups.

Concerns revolve around the new alliance promoting a separate state for the Tamils.

The alliance members have also noted that they will take forward the policies of the now militarily defeated Liberation Tigers of Tamil Eelam (LTTE). Speaking on condition of anonymity, defence sources said that the authorities will keep a close watch on the new alliance to ensure it does not engage in any activity which could pose a threat to national unity and the security of the country.

The pro-LTTE Transnational Government of Tamil Eelam (TGTE) has been calling for the creation of a broad “Tamil National Movement” to take forward the Tamil struggle.

May 9, 2019 byRandev No Comments
An emergency hotline has been introduced by the Sri Lanka Army to report any suspicious situations.

May 29, 2019 byRandev No Comments
The Director of Information at the Ministry of Finance, Mohomad Ali Hassan was arrested by security forces today (29).