We approach the three-week mark since left lane discipline and the bus priority lane were implemented. However, there seems to be no major change in the obedience of Sri Lankan commuters.

Left lane discipline and the bus priority lane were strictly enforced on 9 June 2019 to ensure the smooth flow of traffic, not only in the cities but across the entire island.

During the first week of its implementation, over 580 motorists were charged for having violated the respective laws.

However, three weeks into the implementation of the system, Motor Traffic DIG Ajith Rohana stated that currently, the authorities had detected more than 700 cases of where the rules had been violated within Colombo as well as in surrounding areas.

The newly enforced laws with the intention of disciplining drivers are very similar to the laws already in existence.

“Before new laws are implemented, the Government as well as the authorities must first look at making sure that the laws currently in use are being followed to the word,” All-island Three-wheeler Drivers’ Association Chairman Lalith Dharmasekara told The Sunday Morning.

Dharmasekara stated that laws such as the left lane law were not new regulations introduced to the Sri Lankan traffic code.

“Rather than implementing new laws, the Government must realise that Sri Lanka lacks the infrastructure in certain areas to ensure that these laws are not being violated,” Dharmasekara iterated.

He said that on the Chilaw-Colombo main road in which there are only two lanes – one towards Colombo and one towards Jaffna – commuting would be impossible if the left lane law was not followed.

However, he stated that while he was travelling on the aforementioned road where police patrols were frequently stationed, several motorists travel only on the lane to their right, which was strictly a violation of the most basic law in the traffic code.

“As per British traffic law, all vehicles must travel on the left lane only. This is a regulation that has stood for generations. If motorists refuse to abide by that basic law, how can we expect them to follow new rules and regulations that will be implemented?”

In addition to the lack of obedience on behalf of the Sri Lankan motorist, there is most definitely a lack of infrastructure for comfortable travel.

“Within Colombo city limits, we still do not see designated parking spaces; citizens have to stop their vehicles on the side of the road with half their vehicle on the left lane where vehicles commute, making the experience rather uncomfortable.”

In the hope of improving the situation within big cities such as Colombo and Kandy, the Government hopes to introduce “low floor” buses and improve the public transportation infrastructure.

“However, there is some incoherence when it comes to decision-making from the side of the Ministry,” Lanka Private Bus Owners’ Association President Gemunu Wijeratne told The Sunday Morning.

“We have made several requests to the Minister of Transport and Civil Aviation Arjuna Ranatunga to weaken the bus priority lane law until ‘low floor’ buses are introduced to the public transportation service.”

The association had requested that the strict implementation of the law be done once these buses were in service. However, there seem to be certain delays from the side of the Ministry regarding this matter, according to Wijeratne.

“Our wish is for low floor buses to be introduced to our public transportation swiftly, so that citizens will be deterred from using private transport and will have a well-functioning public transport system to turn to.”

Until these brand new busses are introduced to the roads of Sri Lanka, it is up to the Lankan motorist to be disciplined and abide by the road rules. 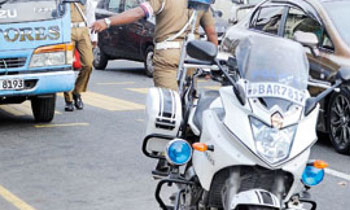 However, State Minister of Transport and Civil Aviation Ashoka Abeysinghe stated that the discipline and obedience of Sri Lankan motorists have always been the problem.

“The law that was implemented this month is not a new regulation. In fact, it’s as old as time; the fact of the matter is motorists have never abided by it,” Abeysinghe added.

“Under the oldest law in the book, all vehicles must commute only on the left lane; there is no denying that. Travelling on the right lane will most certainly be considered a violation and persons who do so will be fined.”

He stressed that all motorists must abide by the road regulations and that it was this lack of obedience that was causing these problems in the country.

“The Ministry of Transport and Civil Aviation have always been and will continue to make people aware of road signs, and more importantly, traffic laws. In fact, just last week, we visited several schools and held workshops where we taught the children the importance of abiding by road rules and being aware of signage,” the State Minister stated.

He commented that the issue lies as well with the authorities, where traffic violations tend to be disregarded due to corrupt officials, which he admits is a major issue that must be fixed if we are to progress as a nation.

The bus priority lane is implemented only from;

Parallel to the bus priority lane law, the left lane law was also implemented.
This means that even though there are two lanes, all vehicles must stick to the left lane unless they choose to overtake a vehicle or have to make a right turn.

June 17, 2019 bythemorninglk No Comments
High-rise condominium complexes continued to sprout in Colombo unabated over the last decade to compensate for a lack of space for the city’s rapidly growing population, bringing to the fore concerns-