January 6, 2020 by themorninglk No Comments

We entered 2019 on the back of a constitutional crisis, with the anticipation and uncertainty that accompanies any year which entails a presidential election. It is safe to say that a lot has happened this year. The country was devastated by the Easter Sunday bombings and had to slowly piece itself back together. The presidential election came and went and the country has a new President and Prime Minister. In a few short months, the General Elections will be held and the new Parliament will be voted in. It is a difficult year to take stock of and summarise, but looking forward what can we expect for 2020? More importantly, what should we be expecting and how do we hold our Government to account?

Are we going to see an economic turnaround?
The country has witnessed quite a drastic turnaround with the introduction of a slew of tax cuts by the President within days of being appointed. The intention of these tax cuts is to ease tax burdens and provide a stimulus to the economy. However, the resulting drop in revenue has been estimated to be 2% of GDP. [1] The Government has taken a few steps to counter this, by raising excise duties and the ports and airports levy. It has also committed to tightening government spending in the upcoming months, as it aims to maintain the budget deficit below 4%. Regardless, the Government appears quite ambitious in its goals for 2020, with economic growth targeted to double this year. [2] The outlook presented by the Government is one that is fiercely positive. 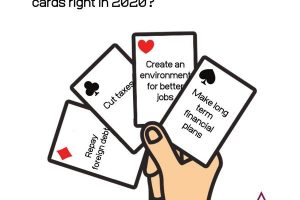 Others are more sceptical. Sri Lanka’s sovereign credit rating has been downgraded to “negative” by Fitch Ratings, with the tax cuts cited as one reason for this drop. They also expect to see government debt increase in the medium term, and argue that the tax increases will not be sufficient to counter the cuts that have been made. The increase in excise duty for instance, will only cover 10% of the revenue lost by the VAT reduction. They do acknowledge that future policy steps could mitigate these concerns and while they expect the budget deficit to widen by 1.5% of GDP, they expect to see an increase in GDP growth by 3.5% in 2020 as well. [3]

What does all of this mean to the individual?
Projections and policy statements are all well and good, but these numbers and percentages take time to translate into anything meaningful to an individual. The recent increase in the prices of vegetables has a greater impact to the voter than what is outlined in the paragraphs above. Sri Lanka’s graduation to upper-middle income status has not necessarily been felt by all Sri Lankans. According to the Household Income and Expenditure Survey (HIES), the mean household income per month is Rs. 52,979. An individual’s mean income per month is Rs. 33,894. [4] An increase in these numbers would be something meaningful. The opportunity to work in decent employment and see an increase in wages is probably what would improve the living standards in this country.

The Government has however tried a different tack with this problem. Following in the steps of innumerous governments before them, they have promised to increase hires into the government service. In a novel twist, the Government has promised to employ 100,000 individuals, selected from families that are recipients of the Samurdhi benefit. The rationale appears to be to give jobs to those most vulnerable. While this is a worthy sentiment, the implications of this policy should be seriously considered. Despite the change in Samurdhi allowance from Rs. 3,500 to a salary worth Rs. 35,000 [5] for each individual, this policy measure further expands the state which already accounts for roughly 14% of the labour force in the country. [6] Salary payments are a substantial component of government expenditure, only coming second to interest payments on our loans. [7]

As the Government appears to embed itself deeper into our economy and takes on such significant policies, it is important to remember that the brunt of their oversight increases the burden on taxpayers. Although it may not feel like it, macroeconomics do shape our everyday lives and if the Government is unable to continue on a path of fiscal consolidation, with careful expenditure management, the impact will be borne by us.


New year resolutions
At this point, it is difficult to predict where the country is headed. Given that the Parliamentary Elections are around the corner, it is possible that some ambitious policies like the moratorium on small and medium enterprise loans, and the increase in government hires are simply to garner public favour. Policy direction may change towards the middle of the year. Regardless, there are a few things to consider and a few facts that are unlikely to change: We have debt repayments to make and unless the Government wishes to default, there should be careful fiscal management to ensure that we are able to meet these commitments. The country is in dire need of economic growth. We need to attract investment and kickstart the economy. Sri Lanka needs to plan beyond four years if we are to escape the dreaded economic boogeyman: The middle-income trap.

A big part of achieving this is holding the Government accountable. In present times, more than ever, this is vital. Sri Lankans, like all people, are not fond of paying taxes; a fact reflected in our low rates of collection. We do however pay them, in various forms and in varying degrees. This money that we hand over to the Government is what partly funds policy decisions, giving us the right to demand accountability and transparency. As we close off an action-packed decade and open this new chapter, it is crucial that we stay committed to ensuring that we get the future we were promised, and the future we deserve.

Janashakthi acquires a 31% stake of Dunamis Capital for Rs 1.4b

September 13, 2018 byCharindra No Comments
Janashakthi PLC (JPLC) today announced the acquisition of 31.14% of the issued capital of Dunamis Capital PLC from Nextventures Limited and Dinesh Schaffter for Rs. 1.4 billion (Rs. 36.60 per share).

July 15, 2019 bythemorninglk No Comments
Wakana JPN (Pvt.) Ltd., which presently owns two hotels in Sri Lanka, will construct and operate a 21-room new boutique hotel in Ahungalla with an investment of $ 8.4 million.