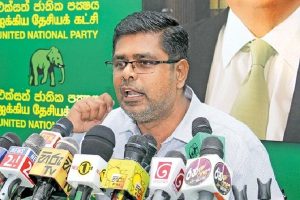 Colombo District United National Party (UNP) Member of Parliament Mujibur Rahman says the time has come for the UNP to take the wheel and drive the country forward.

In an interview with The Sunday Morning, Rahman said that all members of the UNP are thinking and acting as one single unit, and contributing immensely to take the party forward.

He also insisted that there are no ideological differences that exist within the party.

Q: There were many political developments in the electorate that you represent during the last few days. What are your thoughts?
A: You may be referring to the protest campaign staged on Wednesday (5) by the Joint Opposition (JO). That was an utter failure. They were under the impression that they could bring a larger number of supporters to Colombo and create chaos in the city until the Government is toppled. Even their supporters blindly believed them and did what their leaders asked them to do. Members of JO boasted highly that they are not going to rest until they make Mahinda Rajapaksa the premiere of this country. But by 9.30 p.m. people left to their villages. JO members were in five star hotels. None of the Colombo dwellers supported this protest. They clearly showed that they are still with the Government. They showed that they do not have any trust in the former President and his followers.

Q: If you look at it from a different angle, when the no-confidence motion was tabled against the Premiere, everyone thought it was a foolish act to challenge a majority government in Parliament; but the end result marked a drift between the President and the Premiere, causing 16 SLFP members to flee from their positions in the Government. Likewise, the concluded protest showed that even with low participation of their members, the JO is still strong enough to bring the entire capital to a halt at any given time. What are your thoughts on this?
A: Yes, that’s one way to look at it, but before the JO protest, there were a number of protests staged in Colombo. Even when university students take up the roads in Colombo, we have seen the same story. The roads were blocked with traffic and the city came to a halt just like on Wednesday (5). One doesn’t need thousands of people to do it. Traffic congestion could be caused in Colombo even when a vehicle breaks down in the middle of the road.

Q: Members of JO boasted that they were going to take to the roads until the Government gives up; but some say the protest was over when the liquor ran out. Is this true?
A: JO members couldn’t even hold their stance for one day. By about 9 p.m. there were only about 2,500 people present in the area they staged the protest. The organisers were crying out to the people pleading: “If you love Mahinda Rajapaksa you need to stay with us”. Even when I went to meet the protestors with fish buns and tea in the morning, all of them had gone home. I couldn’t meet any of the protestors in Colombo.
Mahinda Rajapaksa is a veteran politician, so are Dinesh Gunawardena and Vasudeva Nanayakkara. However, they had fallen victim to immature acts of some amateur young politicians of the JO. Most of them say this was Namal Rajapaksa’s idea. However, the JO has degraded its stance vastly after this jovial episode.

Q: Talking about buns and tea, there is a strong allegation levelled against you. Some JO supporters suffered food poisoning after consuming poisoned milk packets allegedly circulated by your supporters. Is this true?
A: This is a lie. I’m a politician and I don’t believe in these types of cowardly acts. Also, I’m a politician who has groomed myself to what I am today from the grassroots level. I don’t believe in shortcuts and I also don’t want to tarnish my image by getting my hands dirty in such a fashion. Whatever food distributed, had been brought by the organisers of the protest. No outsider was capable of walking into such a large gathering of JO supporters to distribute food.

Q: This protest went down in the heart of your electorate. Were you ready to face any danger or inconvenience caused to the lives of your people?
A: We have established democracy in this country. Anybody can voice their opinions without interfering with others’ peace. Police force had been called to the scene to neutralise any overdoing. However, we were all ready to counter anything risking the lives of my people. We were nervous when we heard about this protest. We had made our plans to defend ourselves, but when we saw the situation in the afternoon around 2 p.m. we knew this was not going to be any different to an ordinary protest in Colombo.

Q: You mean to say you were happy with the way it ended?
A: With the way they bluffed, we were expecting something big. There should have been many supporters behind bars in an act to topple the Government, but what we saw was some villagers singing songs and enjoying the beauty of Colombo. They were on a trip, with so much entertainment, rather than striving to topple a government. The only incident reported was food poisoning. I feel sorry for the JO bluff masters.

Q: You had your party’s anniversary the following day. You weren’t able to bring even one-third of the crowd we saw the previous day. Why?
A: What we had is not the May Day or the party conference; it was the 72nd anniversary of the party. Even the Leader, or the General Secretary, had not requested larger crowds on that day, but only our hard core members. We celebrated the anniversary gallantly. It was never payback for the JO’s drama that was taken to the roads the previous day.

Q: During the anniversary, the Leader said that he is grooming a new group of leaders focussing on 2030. What does it mean?
A: The leader was emphasising the fact that we already have a group of leaders for 2025. At the same time, we are striving to groom our young second tier to take up the challenge in 2030.

Q: In a pack of wolves where the alpha gets older and weaker, the young ones smell blood and try to take charge. Is there any resistance towards the Leader or are there any layers that are working against him?
A: No. We all think and act as one single unit and contribute immensely to take the party forward. There are no ideological differences that exist within the party. People have different opinions – naturally – but that doesn’t mean that we have no unity amongst ourselves.

Q: Minister Mangala Samaraweera emphasised that the next common candidate should be a UNPer. Do you agree?
A: Yes, definitely.

Q: Do you mean to say that UNP has given up hope on President Maithripala Sirisena, and now want someone from the party in the driving seat?
A: Don’t look at it that way. We have already given the opportunity to the President. We worked for his victory unconditionally. We won the election and made him the Executive President of the country. Now, it is the UNP’s opportunity to take the wheel. That’s how I see it.

Q: When we talk about the minorities in the country, the JO claims that they have won back the hearts and minds of the Muslim community. Is there any validity to that?
A: No. This is a myth that the JO is striving so hard to make people believe. Can you name one Muslim leader who participated in the protest? Yes, there was an issue that took place in Digana. We have arrested the people in connection. The person who had initiated the scene is left behind bars.
In contrast, there were more than 400 incidents that took place during the previous regime. Can you name one person who has been arrested in connection with them? Do you believe the Muslim community would adhere to its torturer? That will never happen.

Adherence to health guidelines: Election cost to double to Rs. 14 b?

May 17, 2020 byTSM Web Desk No Comments
The new health guidelines could double the cost of holding elections to around Rs. 14 billion, the Election Commission (EC) predicted.

January 25, 2020 bythemorninglk No Comments
Sri Lanka has been listed in the provisional agenda for the United Nations (UN) Human Rights Council (UNHRC) session in Geneva which begins next month.