Nip cervical cancer in the bud 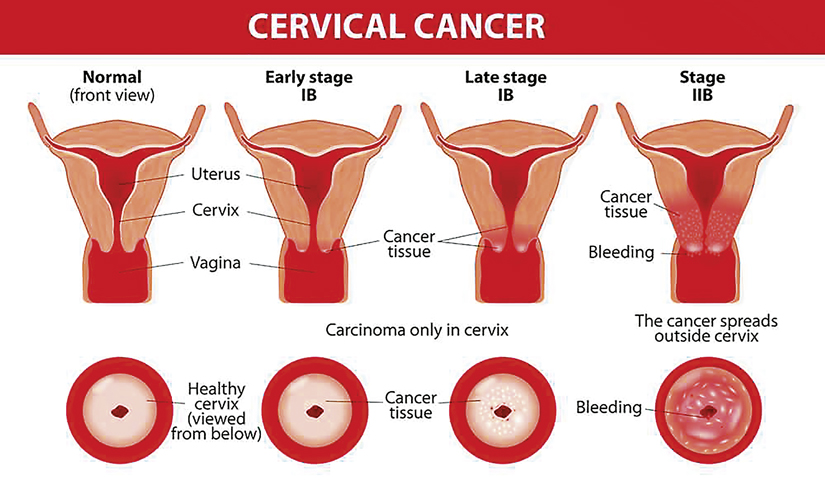 Earlier this week, the Ministry of Health and the UNFPA launched the National Strategic Plan for the Well Woman Programme in Sri Lanka. This comes at a critical moment in the battle against cervical cancer as technological advances reveal that primary prevention of cervical cancer is possible through HPV vaccinations while secondary prevention is possible through HPV testing. To shed light on this development, we spoke to National Cancer Institute Maharagama and Teaching Hospital Mahamodara-Galle consultant gynaecologist and cancer surgeon Dr. Sarada Kannangara (MBBS, MD).

Cervical cancer is a type of cancer that occurs in the cells of the cervix, which is the lower part of the uterus that connects to the vagina. Various strains of the human papillomavirus (HPV), a sexually transmitted infection, play a role in causing most cervical cancer. In a small percentage of people, exposure to this virus causes some cervical cells to become cancerous. However, the risk of developing cervical cancer can be drastically reduced by getting screened or receiving a vaccine that protects against HPV infection.

The commonest symptoms of cervical cancer include intermenstrual bleeding and postcoital bleeding. Dr. Kannangara said if these symptoms are present, it should be investigated without fail in women of any age.

Symptoms and signs to watch out for

Cervical smear (Pap smear) is the current preventive strategy in Sri Lanka offered in well women clinics and in any gynae clinic including in the private sector. Usually, it is advised to screen women between the ages of 35 to 45 years. However, Dr. Kannangara believes that the first screening should be done after five years of coitarche. Especially in the high-risk group;

The Pap smear is usually done in conjunction with a pelvic exam. In women older than 30, the Pap test may be combined with a test for human papillomavirus (HPV). In some cases, the HPV test may be done instead of a Pap smear.

How you should prepare for the test

To ensure that your Pap smear is most effective, follow these tips prior to your test:

Your doctor will gently insert an instrument called a speculum into your vagina. The speculum holds the walls of your vagina apart so he/she can easily see your cervix. Inserting the speculum may cause a sensation of pressure in the pelvic area. Your doctor will then proceed to take samples of your cervical cells using a soft brush and a flat scraping device called a spatula which usually doesn’t hurt.

There are two types of Pap smear tests:

Conventional Pap – samples are smeared directly onto a microscope slide after collection. This is what is available in the government centres.

Liquid-based cytology – the sample of (epithelial) cells is taken from the Transitional Zone. Liquid-based cytology often uses an arrow-shaped brush rather than the conventional spatula. The cells taken are suspended in a bottle of preservative to transport to the laboratory where they are analysed using Pap stains. This method is only available in the private sector hospitals in Sri Lanka.

Dr. Kannangara stated that in Sri Lanka, the population coverage of Pap smear tests is only 50%. Hence, when most of them come to the doctor, they already have cervical cancer, mostly in the late stages. He believes bridging this gap is pivotal for early detection.

The treatment strategy depends on the stage of diagnosis. Broadly, there are four stages.

Stage I (stage one cervical cancer): The cancer is confined to the cervix, but has not spread beyond it. At this stage, surgical resection is possible and the recommended surgery is radical hysterectomy (taking out the womb with its coverings, cervix, upper part of the vagina, whilst preserving the ovaries) with the removal of the pelvic lymph nodes.

Stage II (stage two cervical cancer): The cancer has grown beyond the cervix and uterus but has not reached the walls of the pelvis or the lower part of the vagina. In this stage of cervical cancer, the disease has not spread to the lymph nodes or distant sites. Beyond stage 2A, surgical resection is not suitable and radiotherapy is the main mode of treatment.

Dr. Kannangara emphasised that even at the early stage of the cancer, there is no place for simple surgery such as only the removal of the womb. However, in very early and pre-cancerous stages, one can opt for fertility sparing surgeries. In 1A1 cervical carcinomas, large cone biopsy with clear margins itself is curative and can be safely followed up with Pap smears. In 1A2 disease, the simple vaginal removal of the cervix (trachelectomy) with a laparoscopic lymph node dissection is fertility spearing.

Stage III (stage three cervical cancer): The cancer has spread to the lower part of the vagina or the walls of the pelvis, but not to distant sites.

Stage IV (stage four cervical cancer): The disease has spread to nearby organs or other parts of the body.

He stated that in advance stage four cancer or when there is a recurrence, they opt for palliative care whereas in all other stages, the main intention is curative and they employ surgical methods together with radiotherapy to achieve this.

Prevention is better than cure

The human papillomavirus (HPV) vaccine was introduced into the National Immunisation schedule (EPI) from 10 July 2017. Two doses of the vaccine are given to 10 to 11-year-old girls (in grade six) with a minimum interval of six months through the school-based vaccination programme for prevention of cervical cancer. This is the Quadrivalent 16, 18, 6, 11 (Gardasil). The other vaccine registered in Sri Lanka is the Bivalent HPV 16, 18, 9 (Cervarix). These two vaccines cover the most commonly associated HPV strains with cervical cancer. These vaccines can be given to anyone aged nine to 26 before coitarche. Current evidence suggests that the three globally licensed HPV vaccines have relatively similar effectiveness in preventing cervical cancer.

Although there is no virus-specific treatment for HPV infection, screening and treatment for pre-invasive disease of the cervix is highly successful in preventing progression to cervical cancer. In 2018, UNFPA supported a pilot project in rolling out HPV DNA testing in Kalutara. The HPV gene test can be used in combination with the Pap test to screen for cervical cancer. The American Cancer Society recommends this combination for women 30 and older. The HPV DNA test is not recommended to screen for cervical cancer in women under 30. That is because women in their 20s who are sexually active are much more likely (than older women) to have an HPV infection that will go away on its own. For these younger women, results of this test are not as significant and may be more confusing. The HPV DNA test can also be used in women who have slightly abnormal Pap test results to find out if they might need more testing or treatment.

Finally, Dr. Kannangara stated that this largely underreported preventable disease should be nipped in the bud and the Well Women Clinic is the best place to expand these extensive screening programmes in order for early detection and contribute towards curbing the disease burden.

We spoke to UNFPA Representative in Sri Lanka Ritsu Nacken, and she said: “Early detection is key to ensuring that women can lead healthy lives through immediate treatment. As the UN’s sexual and reproductive health agency, for close to five decades, UNFPA has been supporting the Government of Sri Lanka in ensuring that every woman has access to sexual and reproductive health services. The Well Woman Clinics in Sri Lanka, initiated in 1996 by the Ministry of Health, were established for this reason; screening of cervical cancer being one of the many services offered by the clinics.

“To strengthen the programme, UNFPA supported the Ministry of Health in the National Strategic Plan for the Well Woman Programme (2019-2023), which aims to ensure that every woman in the targeted age cohorts, especially those farthest behind, benefit from quality health services through the Well Woman Clinics around the country.”

Liven up your Sundays at KAVA

July 14, 2019 bythemorninglk No Comments
KAVA is the most recent addition to Colombo’s nightlife – a cocktail bar and now also a Sunday night BBQ, the place is oozing endless potential.