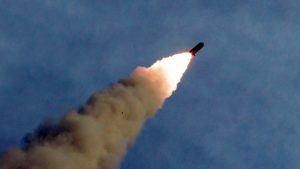 The launch of several unidentified missiles from North Korea has been detected by the Japenese coast guard and the South Korean military, mere hours after Pyongyang said it would resume denuclearization talks with the US.

At least two projectiles were launched from Wonsan in the Kangwon province, eastward into the sea, Yonhap news agency reported on Wednesday citing South Korea’s Joint Chiefs of Staff.

This is the first missile test since the launch of two unidentified projectiles on September 10, and the 11th missile launch since May, when Korea resumed testing after the failure of talks with the US in Vietnam.

On Tuesday, the US State Department announced the resumption of talks with North Korea at staff level, with the US delegation being led by special envoy Stephen Biegun. This follows the June meeting between US President Donald Trump and North Korean leader Kim Jong-un at the Demilitarized Zone between the two Koreas.

Trump and Kim met in Hanoi in February for a second summit dedicated to denuclearizing the Korean peninsula and maybe even ending the Korean War, kept frozen since the 1953 armistice. However, the summit abruptly ended when the US rejected North Korean proposal for a partial lifting of sanctions as a gesture of goodwill.

While South Korea and Japan have been alarmed at the uptick in missile tests, Trump has dismissed it as business as usual.

“He likes testing missiles,” he said of Kim after the August 24 test, adding that the North Korean leader “has been pretty straight with me – and we’re going to see what’s going on.” RT