No funding for crumbling courthouse

Funds have not been allocated to repair the Colombo District Court (DC) complex that is on the verge of collapse, The Sunday Morning learnt.

A senior official at the Ministry of Justice told The Sunday Morning that government funding was not allocated to repair the existing buildings or construct new buildings for the judiciary this year.

The official said the Ministry was still in the process of paying off the expenses incurred last year for the construction of new court complexes and other infrastructure.

However, senior lawyers noted that the funding for the renovation of the damaged buildings ought to be allocated by the relevant Minister as it was their responsibility to protect the public as well as local heritage.

“Once the building collapses, there will not be anything left to protect. Therefore, the sooner they act on it, the better. Immediate actions are necessary,” they claimed.

As The Sunday Morning highlighted last week, the Colombo DC building is in dire need of heavy repairs as its infrastructure is evidently crumbling. The flooring has not been replaced for decades and the unattended holes in the roof allow water to leak through to the court rooms when it rains. The court complex had only been given the option of a band-aid solution instead of much-needed safe and well-engineered renovations.

A litigant who visits the Colombo DC from time to time told The Sunday Morning that he was afraid of entering the building but had no choice as his case was heard only inside the building.

“There are no proper toilet facilities for litigants and the existing ones are also rarely used as the situation is terrible. It could collapse at any time if the Government does not come up with a plan to actually fix the building instead of temporarily patching it up,” he stressed. 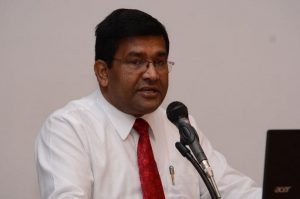 Former Bar Association of Sri Lanka (BASL) President U.R. De Silva said that altogether about eight court houses and all district courts reside in this court complex and people wait both outside and inside it. Around 500 people, including the staff, work inside this building. Judges’ chambers leak when it rains, making it impossible for them to work peacefully, the air conditioners are malfunctioning, and the drainage system is blocked, where if the rain continued for two weeks, there was a high possibility that the building would collapse.

When contacted by The Sunday Morning, Secretary to the Ministry of Justice R.M.D.B. Meegasmulla stressed that there were a number of requests made by the authorities around the country to repair the buildings, but funds have not been allocated this year.

“We are planning for the renovation of the building. This building is not like the others; it has a historic value and therefore, the renovation first needs to be approved by the Department of Archaeology,” Meegasmulla said.

However, when inquired whether they have requested the Department of Archaeology to send the estimates, the Secretary stated that they were not responsible for sending the estimates, but were authorised to instruct on how the building should be renovated.

“We have not yet requested the Department,” he added.

Meanwhile, Meegasmulla also noted that the previous plans made by former Minister of Justice Wijeyadasa Rajapakshe were still being considered by the Ministry which was yet to decide whether it should go for a private-public partnership (PPP) or not.

The PPP solution was criticised by the senior lawyers who lashed out at the Ministry, claiming the building was not something which private companies could earn profits off and therefore, the Government couldn’t go for a PPP.

Instead, eminent lawyer Dr. Kanaganayagam Kanag-Isvaran PC pointed out that the Government could look for Dutch Government funding as the monument was built by the Dutch, as the Dutch Government supported Sri Lanka in renovating the Galle Fort and Jaffna Fort. He said that they would come forward to help the Government if their intervention was requested.

He highlighted that there should be a strong will to renovate the court complex, quoting the saying “if there’s a will, there most definitely is a way”.

Meanwhile, former BASL President Upul Jayasuriya PC lashed out at Minister of Justice Thalatha Atukorale for turning a blind eye to the atrocious state the buildings were in.

“If they don’t have a proper solution, they should come out and seek the assistance of the BASL. Then, the lawyers could help them find a solution,” he stressed.

“The Government can also seek the assistance of foreign countries and we’re very confident they would come forward to help us,” he added.

But the problem now was that the Minister was doing nothing to develop the judicial infrastructure, he said, adding that the Ministry had not done a proper survey too. He said that not only the Colombo DC, but most other buildings that come under the Ministry were in the same situation as proper assessments or renovations were not being duly carried out.

February 26, 2019 bythemorninglk No Comments
Gruesome murder of two businessmen puts spotlight on the Police. The killing of Manjula Asela Kumara (33) and Rasin Chintaka (31), has left their friends and family in a state of shock.