No risk to party unity : Harsha 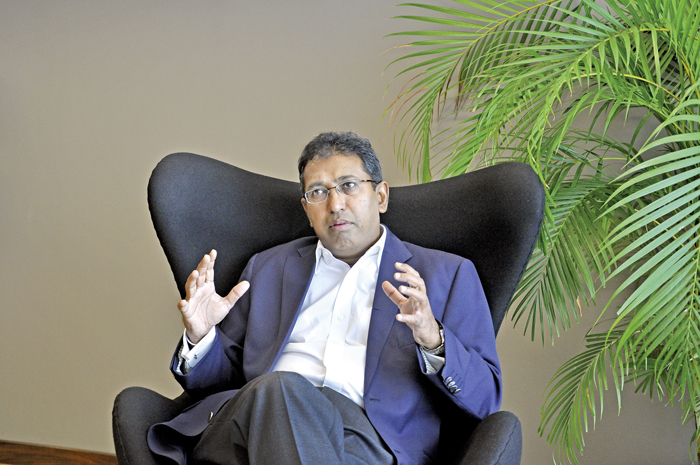 Why is the UNP taking so long to select a presidential candidate?

Our party is a democratic entity and therefore, many the last years since the party was established in the 40s, our constitution provides for a mechanism on how to select a candidate and we will democratically select who our candidate is. That is taking some time and we will do it accordingly.

With so much support, isn’t Sajith Premadasa the obvious choice?

Many have opined that it is the UNP Leader’s greed for power that is causing this deadlock. How do you see this?

I don’t want to put it in those words. Ranil Wickremesinghe has steered this party through multiple crises since 1994. He has brought us victory sometimes. Yes, we’ve had our ups and downs. In 2005, we pretty much won the election, but the LTTE was paid off to stop the ballots from being cast in Jaffna and the North and that cost the few hundred thousand votes needed for Wickremesinghe to beat Mahinda Rajapaksa. We all know what happened in 2010 and 2015. So right through all this, he has led our party. But now, I think the time has come to review who needs to be our candidate and the most popular person should be put forward as the candidate. It is a democratic process. That’s what I have to say.

As much as some assume that the party leadership is greedy for power, there is also a feeling that Sajith Premadasa is also hungry for power and is not putting the party first. How would you respond to this allegation?

In a truly democratic party, various views will emerge and people who believe that a certain person has established themselves in terms of popularity in winning an election, will pretty much campaign for that person.

There is nothing wrong with it. Even in countries such as the US, there are primaries which are fought and then a particular person’s name is put up and everyone backs that candidate and faces the election.

So even though in Sri Lanka we don’t practice anything like that, to an extent, it is a contest among a few individuals who believe they can become the presidential candidate with the support of the party.

Premadasa has not been nominated yet but his election campaign is going ahead. Why is he in such a hurry to portray himself as a suitable leader?

You see, (Gotabaya) Rajapaksa is also campaigning before nominations have been called. If he is campaigning, are you asking us to keep quiet and let him campaign by himself?

Gotabaya Rajapaksa is a formidable opponent. Therefore, we have to make sure that our party grassroots are woken up, that our systems are activated, that we speak to various segments of society and we are ready, not only to face an election but to win it. We are doing what is right by the people of this nation and our party.

Don’t you feel that his actions have put the future of the UNP at risk – with the division and lack of unity openly showing?

I don’t think that anyone is trying to put the unity of the party at risk. That is what the Opposition wants to portray. That is what the media of the Rajapaksa camp is working on relentlessly, day and night, trying to convince the people. We have to be smarter than that. What we are doing is essentially waking up our grassroots.

The people of our party have been waiting for a long time for the opportunity to support a person from the UNP at a presidential election. This is happening after many years. Our cadres are really excited to bring victory to the UNP.

In the current political climate, the UNP has to depend on the minority vote for success. What can Sajith Premadasa offer the minorities?

The UNP has always been and will continue to be a party for all Sri Lankans. We don’t see minorities and majorities. We see Sri Lankans of different ethnic and religious groups. They are all welcome in our party. This party was created with the coming together of the different communities. Therefore, there is nothing that we are going to offer the majority and not offer the minorities and vice versa.

Our archrivals are obviously an ethno-centric and religio-centric party and they are only appealing to the Sinhala Buddhist majority, and it is very clear in their actions and words that they see non-Sinhala-Buddhists as secondary citizens of this nation. We don’t.

Whether it is Sajith Premadasa, Ranil Wickremesinghe, or Harsha de Silva – it doesn’t really matter. What matters is what has been the policy of the UNP. So there is no personality or person who is going to offer anything to any community. It is the policy of the UNP – a policy of inclusivity for all communities.

Addressing a rally after the Easter bombings, Premadasa asserted that national security trumped human rights and democracy. Should we expect such policies if he is elected president?

We will, at the right time, show the kind of fire power – to put it in those terms because you are talking of national security – that Premadasa has.

May 27, 2019 bythemorninglk No Comments
Law and Trust Society Executive Director Sakuntala Kadirgamar asserted that constitutional reform must take place to ensure equality to all communities in the country.

There are alternatives if SLPP alliance fails: Rohana Lakshman Piyadasa