Investigations into the Easter Sunday terror attacks are ongoing, with over 70 suspects arrested as at the time of writing.

Presently, it had been identified that a splinter group of the National Thowheed Jamath (NTJ) was responsible for the attacks.

According to military sources, the attacks were led by Zahran Hashim – the man who initially formed the NTJ group in 2011 in Kattankudy, through which he was able to recruit a following of around 40-50 people. 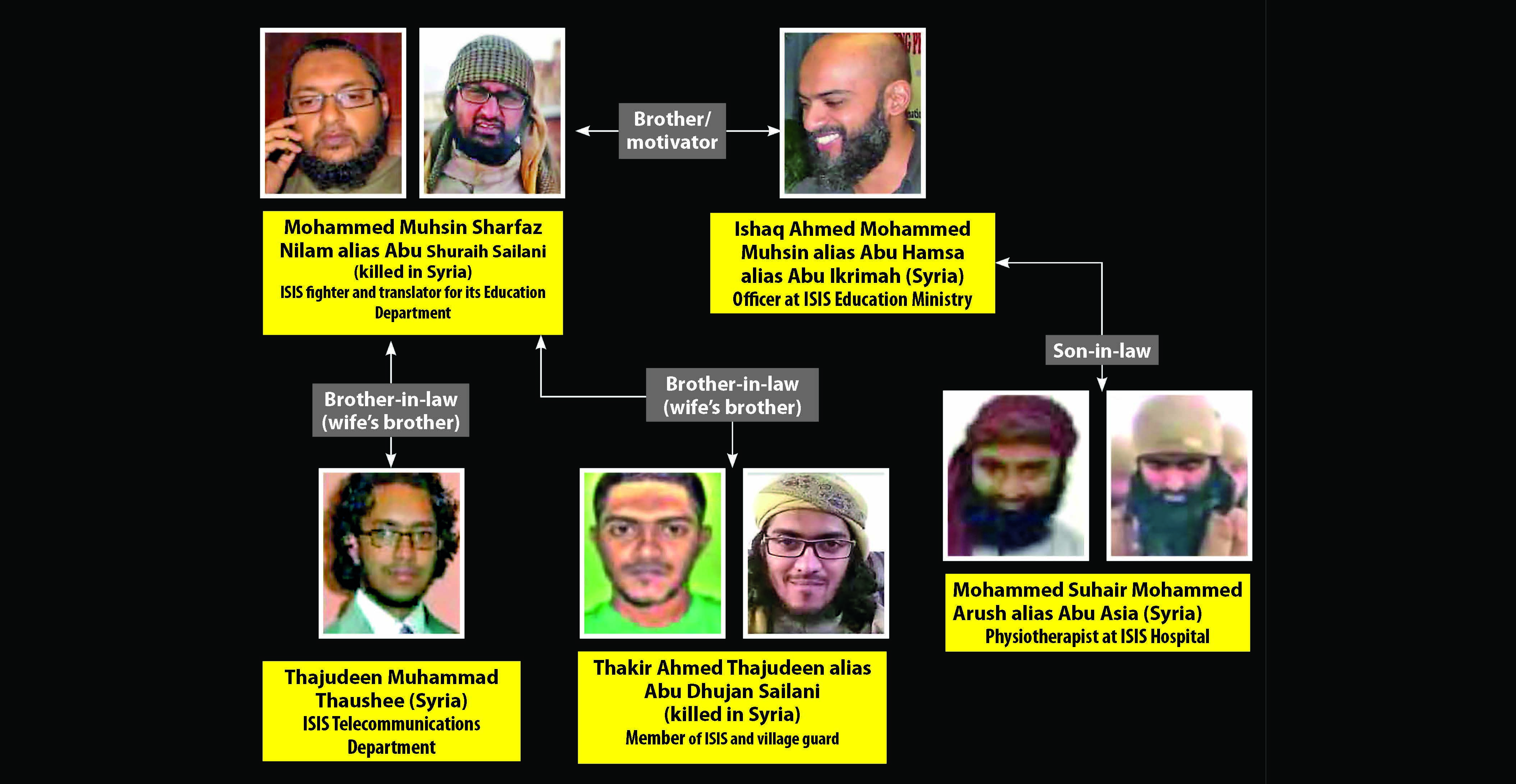 On 10 March 2017, a clash occurred between Zahran’s followers and the followers of Rauf Maulavi – a head of a mosque in Kattankudy who didn’t agree with Zahran’s puritanical views, after which Zahran fled from Kattankudy and hid from the Police.

During this time, the NTJ was taken over by Thawfeek Maulavi – previously a good friend of Zahran – who disowned Zahran and is his extremist ideologies.

Thereafter, Zahran joined a mosque in 2006 called Daharul Adar and continued to preach his extremist ideologies there.

Another Islamic extremist group that was formed is the Jammathai Millath Ibrahmfi Seylani (JMI) which was started in 2015. (cannot find anything online)

It was formed by radicalised Muslim youth who were influenced by the Islamic State and came from wealthy backgrounds.

The JMI consisted of around 130 individuals, of whom 39 had extremist agendas and close relations with Zahran and his group.

It is believed that the JMI split into two groups around a year ago, following an internal dispute regarding extremist activities.

Zahran and six others had carried out the Easter Sunday attacks, two of whom have been identified as the sons of wealthy spice exporter Al-haj Yusuf Mohamed Ibrahim (65 years old).

The two sons, who were suicide bombers, were Imsath Ahmed Ibrahim (33) and Ilham Ahmed Ibrahim (31). They blew themselves up inside the Cinnamon Grand and Shangri-La hotels in Colombo.

Al-haj Yusuf Mohamed Ibrahim and his third son, Ijas Ahmed Ibrahim (30), were arrested at their three-storied luxury home down Mahawila Gardens in Dematagoda.

Ilham Ibrahim and Imsath blew themselves up as guests queued at the breakfast buffet at the Shangri-La and Cinnamon Grand hotels in Colombo.

They were in their early 30s and operated their own “family cell”. 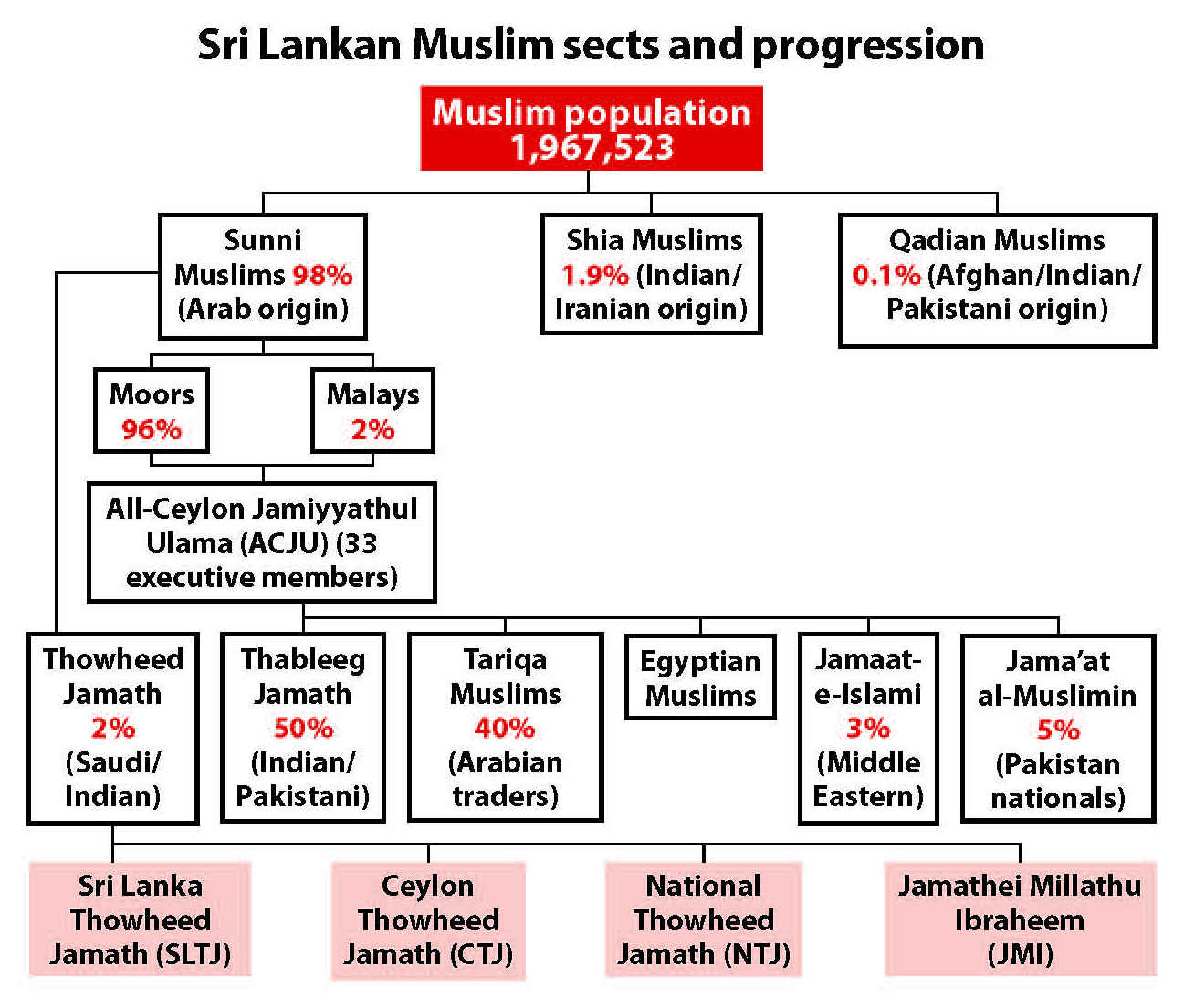 On Sunday (21), when the Criminal Investigation Division (CID) conducted a search of their home, as they approached the top floor, a bomb was set off remotely, killing three officers from the Colombo Crimes Division (CCD).

When the CID went in a second time, another bomb was set off on the second floor, killing Fathima Jiffry (25) and her two children.

The Police are carrying out investigations along with the tri-forces, who are conducting islandwide operations.

Police Spokesperson SP Ruwan Gunasekara said that thus far, 70 individuals had been arrested and that 33 were being questioned by the CID.

He shared that among them, four were women, and were being interrogated by the Terrorism Investigation Division (TID).

Combined troops conducted a thorough search of the World Trade Centre (WTC), Bank of Ceylon Tower in the heart of Colombo Fort, the Nelum Pokuna Theatre, and several other buildings of commercial value on Thursday (25).

According to the Army, troops carried out similar operations in Mattakkuliya and its suburbs, Katuwapitiya, Pugoda, Puttalam, and Kalladia.

In addition, troops provided full security for all funerals that took place in the Katana and Negombo areas as well as in Colombo.

According to the Military Spokesman, close to a contingent of about 10,000 Army personnel have been deployed in Colombo and its suburbs in order to crackdown on movements of terrorists, their sympathisers, and their operations involving the transportation of explosives, arms, and ammunition.

On the instructions of Major General Sathyapriya Liyanage, Commander Security Forces (West) and Army troops conducted routine foot and mobile patrols and set up road blocks wherever necessary and conducted thorough searches of selected vehicles, safe houses, and buildings in Colombo and the suburbs since Wednesday.

Similar search operations are underway in the Eastern Province in close combination with the Special Task Force (STF), Navy, Air Force troops, and the Police. A few suspects from the Riditenna,

Valachchenai, Kattankudy, and Dimbulagala areas were taken into custody by combined troops on Thursday (25) morning as they failed to furnish valid reasons for their presence in respective locations.

On Friday, during a joint raid by the STF, Army, and the Police in Samanthurai, Ampara, an IS uniform and banner, 150 sticks of gelignite, and 100,000 metal ball bearings were found and confiscated.

The very same evening, military troops engaged in a shootout with terrorist suspects in Nintavur-Kalmunai and an explosion too was confirmed by Army Spokesman Brigadier Sumith Athapaththu.

At the time of writing, one civilian had been reported dead and three others were injured in the crossfire.

The Army had observed two bodies which they suspected to be that of terrorists.

The chaos began in the early hours of Sunday, between 8.30 a.m. and 11.30 a.m., when six blasts occurred in several parts of the island.

It can be confirmed that the St. Anthony’s Church explosion occurred at 8.35 a.m. as the church clock tower stopped working as a result.

Around 2.15 p.m., a seventh blast was reported in Dehiwala, at a small hotel – The Tropical Inn – resulting in two casualties.

Soon afterwards, while police officers were investigating a tip off, the eighth explosion occurred at a housing complex in Dematagoda.

Around this time, the Government took measures to block all social media platforms, including WhatsApp and Viber, in a bid to quell the spread of fake news and false rumours.

President Maithripala Sirisena, issuing a special statement, condemned the explosions which occurred across the country.

Expressing his shock and dismay over the events, President Sirisena requested the public to remain calm and assist authorities to investigate the cause of these explosions.

The President stated that all steps had been taken to tighten security in the country and all security forces had been instructed in this regard.

The President also called on the public not to be misled by false news and speculation and assured that the Government was taking every necessary measure.

An all-island curfew was imposed with immediate effect around 3.30 p.m., until further notice.

Minister of Education Akila Viraj Kariyawasam then announced that all schools would be closed for the next two days. All state universities were also to be shut down indefinitely.

Prime Minister Ranil Wickremesinghe, issuing a statement, said: “I strongly condemn the cowardly attacks on our people today. I call upon all Sri Lankans during this tragic time to remain united and strong.

A special meeting of the Security Council, including the Prime Minister, State Minister of Defence Ruwan Wijewardene, Chief of Defence Ravindra Wijegunaratne, the heads of the tri-forces, and the Inspector General of Police Pujith Jayasundara, was held.

Speaker of Parliament Karu Jayasuriya had called for an emergency meeting of Parliament for Tuesday (23), in light of the events.

In a symbol of solidarity in these dark hours, the National Blood Bank issued a notice requesting donors to refrain from visiting the banks as too many had already donated blood throughout the day.

The cues at the blood bank led up to the main road.

Former President Mahinda Rajapaksa in a statement, said: “It is absolutely barbaric to see such violent attacks on such a holy day.

Whoever is behind these attacks must be dealt with immediately. My thoughts and prayers are with the families that lost loved ones, and all of Sri Lanka. We will not tolerate such violence, such acts of terrorism and of cowardice within our borders once again. We will stand together and rise up against it as one voice. We will stand united as a nation.”

The Presidential Secretariat announced that 22 and 23 April had been declared government holidays.

An eyewitness to the St. Anthony’s Church bombing said that initially, he thought the explosion was a result of a gas leak or a transformer combusting, but then the screams from within and the people rushing out convinced him otherwise.

“I was walking to the shop at around 8.30 a.m. when a loud bang occurred from the church and pieces of debris came flying out. I then heard the screams and knew something was terribly wrong,” Philip Rajasingham said.

He said that he went in to help and that all he saw were bodies flung across the church pews and blood everywhere.

August 18, 2019 bythemorninglk No Comments
The Sri Lanka Freedom Party (SLFP) and Sri Lanka Podujana Peramuna (SLPP) will meet this week to discuss a proposed alliance between the two groups to face the upcoming presidential election.

January 21, 2019 bythemorninglk No Comments
The Government said that the Sri Lankan Airlines London office was shifted to reduce losses.