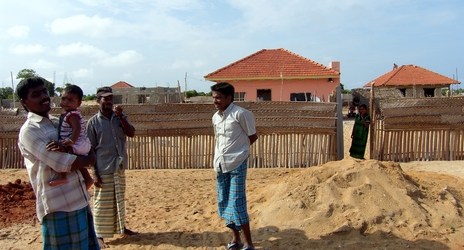 The government-sponsored housing project in the North and East has been hit by a fresh rift with no agreement reached on the type of houses to be constructed.

Prime Minister Ranil Wickremesinghe had talks with the Tamil National Alliance (TNA) and his officials on Friday on the housing project.

Wickremesinghe headed the meeting as the Minister in charge of Resettlement and Rehabilitation and Northern Province Development.

Sources said that Advisor to the Ministry R. Paskaralingam proposed that part of the houses in the housing project be concrete houses.

This was in line with Cabinet approval given last year to construct concrete houses under a proposal submitted by then Minister D.M. Swaminathan.

Swaminathan had brought in a Chinese company to carry out the project but, following concerns raised by India, the contract was withdrawn from China.

Now an Indian company has come forward to do the needful and the Government is looking at expediting the project.

However, The Sunday Morning learnt that some TNA MPs at the meeting objected to concrete houses being constructed for some families and cheaper brick houses for some.

It was noted at the meeting that the disparity might not go well with the families and so it would be better to instead construct similar houses for all.

Concerns were raised over reported attempts to construct some concrete houses using ash from the Norochcholai coal power plant and other cheap material.

The Sunday Morning learnt that TNA MP S. Shritharan meanwhile proposed that model houses be constructed in the North, so families could inspect and decide what was best for them.

However, with no agreement still reached, the government-sponsored housing project is yet to move ahead.

The Government has committed to construct houses for the war displaced families as there is still a need for over 160,000 houses.

India is already constructing houses under its own housing project in the North and East as well as in the Central Province.

January 17, 2020 byTSM Web Desk No Comments
The Civil Aviation Authority of Sri Lanka has lifted the ban on drones.