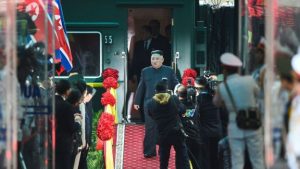 North Korean leader Kim Jong-un has arrived in Vietnam for a summit with US President Donald Trump later this week.

The second US-North Korea summit follows a historic first round of talks last year in Singapore.

Mr Kim’s green and yellow train pulled into Dong Dang station, and he has already begun the final leg of his journey to Hanoi by car.

Ceremonial guards and flag-waving crowds lined a red carpet laid out for him at the station.

Security guards, officials and cameramen crowded Mr Kim and his party as they disembarked from the train and were ushered into a waiting car.

Mr Kim then paused in front of the crowds for a brief moment, sticking his hand out of his limousine window to wave.

His trademark team of black-suited bodyguards were waiting for him at the station, and as his car pulled away they briefly ran alongside it.

He is thought to be travelling with his sister Kim Yo-jong and one of his key negotiators, former General Kim Yong-chol. BBC

March 21, 2019 byRandev No Comments
Aid agencies are scrambling to reach survivors of Cyclone Idai in Mozambique as the full scale of the disaster becomes clear.

US Senate advances measure to end support for Saudi forces

November 29, 2018 byMalik No Comments
The US Senate has advanced a measure to withdraw American support for a Saudi-led coalition fighting in Yemen.