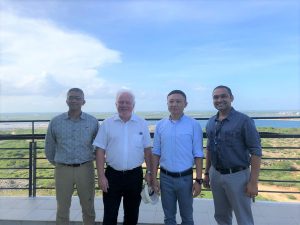 The Norwegian Ambassador to Sri Lanka Thorbjørn Gaustadsæther has visited the Southern Province to hold key talks with officials as well as officials at the Hambantota Port.

The Ambassador had conducted his visit from 23-24 May and had met with the Southern Province Governor Rajith Keerthi Tennakoon as well as several religious leaders from the area.

The Embassy had mentioned that the Ambassador had also spoken with representatives from the Women In Need (WIN) Organisation as well as holding key talks with the Chief Executive Officer of the Hambantota Port, Ray Ren.