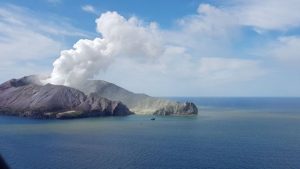 Authorities hoped they would be able to retrieve the eight people presumed dead on the island on Wednesday.

So far, six people have been confirmed dead in the tragedy. Another 25 are in critical condition in hospital with severe burns.

The volcano, also known as Whakaari, erupted on Monday when dozens of tourists were on the island.

“I’ve spoken to many of those involved in the operation and they are very, very eager to get back there, they want to bring people’s loved ones home,” Prime Minister Jacinda Ardern told reporters.

Meanwhile, the identification process and post mortems of the victims are underway.BBC

June 15, 2020 byTSM Web Desk No Comments
Beijing has recorded 36 new locally-transmitted coronavirus cases, amid fears of a second wave in the Chinese capital.

November 7, 2018 byMalik No Comments
The US Democrats have taken control of the House of Representatives in the mid-term elections, dealing a serious blow to President Donald Trump.