The Official Spokesman and Head of Media at OHCHR Rupert Colville told The Sunday Morning that they have been rather disturbed by some of the comments and statements relating to the High Commissioner and the Human Rights Council that have been appearing in Sri Lanka in the last few days.
Last week, the High Commissioner said in a statement that she was deeply disappointed by the spin that had been put on her discussion with the Sri Lankan Government delegation which met her in Geneva.
She noted that some news outlets in Sri Lanka were also continuing to significantly misrepresent the Human Rights Council process in Geneva.

On Wednesday, President Maithripala Sirisena refused to fully implement proposals and recommendations made by the High Commissioner and the UNHRC and also accused Sri Lanka’s Ambassador to Geneva of signing the cosponsorship of the draft resolution on Sri Lanka without informing him or the Foreign Minister.

However The Sunday Morning learnt that Foreign Minister Tilak Marapana was fully aware of the decision taken by the Government to cosponsor the Resolution and that Sri Lanka’s Ambassador to Geneva A.L.A. Azeez was only following instructions but is now being used as a scapegoat.

“No Ambassador will sign such a document without obtaining clearance from the Foreign Minister or Foreign Secretary. Nothing is done by an Ambassador without instructions being issued and that was the case even in Geneva,” Foreign Ministry sources told The Sunday Morning.

peaking at an event on Thursday, the President said that on 25 February, the Sri Lankan Ambassador in Geneva (Ambassador A.L.A. Azeez) had signed the Resolution without informing him and so he did not accept it.

During the just-concluded 40th session of the UNHRC in Geneva, the Council passed a Resolution on Sri Lanka titled “Promoting Reconciliation, Accountability and Human Rights in Sri Lanka” which gives Sri Lanka another two years to fully implement Resolution 30/1 of October 2015.

Resolution 30/1 of October 2015 notes the importance of participation in a Sri Lankan judicial mechanism, including the special counsel’s office, of Commonwealth and other foreign judges, defence lawyers, and authorised prosecutors and investigators.

However, the President and some members of the Government asserted that Sri Lanka would not agree to include foreign judges in a local judicial system. 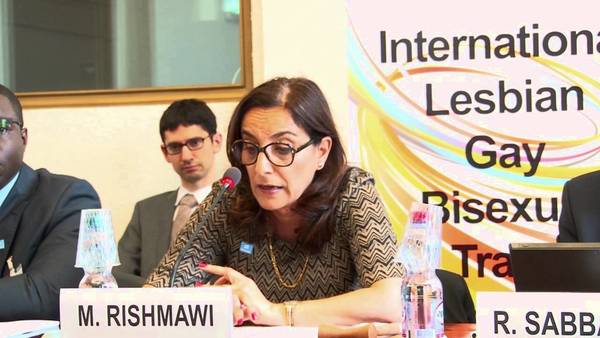 The OHCHR Chief of Rule of Law Equality and Non Discrimination Branch Mona Rishmawi, who was in Sri Lanka and met the Government days before the 40th session of the UNHRC, told The Sunday Morning that OHCHR would like to see what alternative proposals Sri Lanka has if it is to reject the proposals made by OHCHR.

“There are some emblematic cases which are blocked because of the local justice system. So Resolution 30/1 proposes obtaining foreign assistance. If Sri Lanka is not prepared to do so, then they must propose an alternative. Focusing on the nationality of the judge is not important but what is important is how to unblock this accountability problem. We need to see that justice is done. Right now, we see the process is slow and it’s not delivering,” she said.

Rishmawi said that after the 2015 Resolution on Sri Lanka was passed with the support of Sri Lanka, the OHCHR office had been working with the Government to implement the proposals in the Resolution.
She noted that the Government had taken several important steps which included establishing a task force to look at the human rights issue and made proposals which were in line with the expectations of the international community.

From our point of view, we feel several positive measures have been taken since then, such as the establishment of the Office on Missing Persons (OMP) which will benefit all communities. We also welcome the fact that there is a discussion around the setting up of a reparations office. We support the work of the independent commissions established after the 19th Amendment was passed. We also know there is a Bill on truth seeking. So we acknowledge that a number of positive steps have been taken,” she said.

However, she said the process is going at a slow pace and so the last Resolution calls for a time-bound process.

However, President Maithripala Sirisena, last week, criticised the OMP and moves to establish a truth seeking commission while the Foreign Minister said that Sri Lanka would not agree to any deadline.
However, Rishmawi said that by cosponsoring the last Resolution, Sri Lanka agreed to show more progress over the next two years.

Last week in Parliament, several comments were made on the Resolution and the High Commissioner’s report on Sri Lanka with different views and interpretations being voiced.

“I think we can refocus attention on the implementation of this Resolution. What has happened over the last few days is a little distraction. Instead of saying we have something positive to work with the international community on, there is a distraction on what was said and what was not said. This is not helpful because the Resolution is the Resolution and the report by the High Commissioner is very clear; and the High Commissioner stands by her report,” she said.

No u-turn for Govt.

Rishmawi said that the High Commissioner wants to keep the focus on fulfilling the obligations and ensuring justice and accountability for all communities.

Rishmawi said that OHCHR is committed to ensure Resolution 30/1 and 40/1 are fully implemented and they hope the Government will support the implementation of the Resolution.

“That is what we have been asked to do. The High Commissioner has been asked to continue to assess the progress in the implementation of the recommendations in the Resolutions, particularly 30/1 of 2015. That is really our role,” she said.

The High Commissioner had proposed the establishment of a fully-fledged OHCHR office in Sri Lanka to assist in the full implementation of Resolution 30/1.

However, the Government informed the High Commissioner that it cannot agree to the request.
“If the Government does not want us to be there, then what is their alternative? Doing nothing is not an alternative,” Rishmawi said.

She also noted that after making an open and written commitment to implement Resolution 30/1, the Government could not make a u-turn and say it will not implement it.

March 2, 2020 byTSM Web Desk No Comments
The number of people killed worldwide by the coronavirus has exceeded 3,000, as China reported 42 more deaths.