The Warwickshire fast bowler Olly Stone has been given his first opportunity to impress in England colours, after being named in a 16-man squad for the five-match ODI series in Sri Lanka which gets underway in Dambulla on October 10. 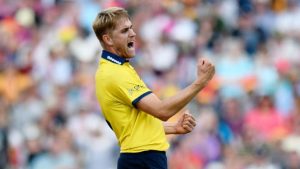 Stone, who turns 25 on the eve of the first match, is the only uncapped player in the tour party, and a strong candidate to feature in next week’s Test squad too, having made a strong impression in his maiden season at Edgbaston following his move from Northamptonshire at the end of 2017.

Since recovering from a horrific knee injury in June 2016 – he damaged his anterior cruciate ligament while celebrating the wicket of Moeen Ali in a T20 Blast tie at Wantage Road – Stone has consistently been one of the fastest bowlers on the county circuit.

He claimed career-best figures of eight for 80 in his first home Championship appearance for Warwickshire in April, as well as a further 12 wickets at 28.61 in the Royal London Cup – and he could be given the chance to fill Liam Plunkett’s crucial role of mid-innings enforcer, with Plunkett set to miss the first three matches of the tour because of his forthcoming wedding.

Mark Wood, whose international summer was interrupted by a recurrence of his longstanding heel problem, is also back in contention, as is Chris Woakes, who missed the last two Tests against India following a quad strain.

With David Willey missing the Sri Lanka trip due to a back injury, Sam Curran offers a like-for-like replacement as a left-arm swing bowler and hard-hitting all-rounder, although he would doubtless have earned a call-up regardless, in the wake of his stellar display in the Test series against India.

Sam’s brother Tom is also back to fitness and back in the squad after a side strain ruled him out of the one-day leg of England’s summer, which means that both Curran brothers could yet feature in the same England team for the first time in their brief careers.

With a surfeit of all-rounders to back up England’s established top-order, there is no place for Kent’s captain Sam Billings, who has been a regular member of England’s recent limited-overs squads but who failed to take his chances against Scotland and Australia earlier this summer.

On the slow-bowling front, England’s selectors resisted the temptation to blood a young spinner alongside the established pairing of Moeen Ali and Adil Rashid – Lancashire’s Matt Parkinson might have been a contender – and have instead opted for the all-round prowess of Hampshire’s Liam Dawson, who last featured for England in the T20 triangular against Australia in New Zealand in February. His most recent ODI was against Pakistan at Cardiff in September 2016.

Ben Stokes hearing on December 5 and 6 –

As expected, both Ben Stokes and Alex Hales have been included in the squad in spite of their impending ECB disciplinary hearing. The pair will attend a private hearing in front of a three-man Cricket Discipline Commission panel on December 5 and 7, after being charged with bringing the game into disrepute following an incident outside a Bristol nightclub last September.

A separate squad will be named for the one-off T20 against Sri Lanka in Colombo on October 27, which may offer the selectors a chance to assess the merits of a few more young contenders, not least Pat Brown, the 20-year-old star of Worcestershire’s T20 Blast triumph.

June 24, 2019 byRevatha No Comments
Will Sports Minister Harin Fernando appoint another Interim administration for our ailing cricket which got suddenly rejuvenated by SL's win against England last Friday?

February 18, 2019 byRandev No Comments
Kusal Perera hit an unbeaten 153 as Sri Lanka chased 304 to claim a stunning one-wicket win over South Africa in the first Test in Durban.