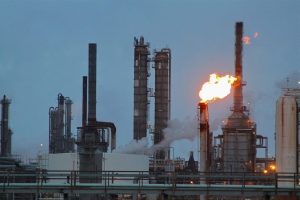 Oman’s Minister of Oil and Gas Dr. Mohammed Hamad Al Rumhy arrived in Sri Lanka yesterday amidst controversy over a deal purported to have been signed between Sri Lanka and Oman for an oil refinery in Hambantota.

The Board of Investment (BOI) said yesterday that the Government of Oman is yet to sign an agreement with Silver Park International (Pvt.) Ltd. for the greenfield oil refinery in Hambantota.

However, a foundation stone for a petroleum refinery & a cement factory was ceremonially laid by Prime Minister Ranil Wickremesinghe at Mirijjawila, Hambantota today (24).

A senior official of the BOI told The Sunday Morning that the Omani Minister of Oil and Gas Dr. Mohammed Hamad Al Rumhy, who arrived in Sri Lanka yesterday, will participate in the groundbreaking ceremony for the greenfield oil refinery to be held in Hambantota today.

Deputy Minister of Development Strategies and International Trade Nalin Bandara told The Sunday Morning that Omani Minister Dr. Rumhy would be the guest of honour of the groundbreaking ceremony in Hambantota.

The CEO of Oman Oil Refineries and Petroleum Industries Co (ORPIC) Musab bin Abdullah Al-Muhrooqi will also participate in the event.
The Omani Minister and his delegation will have key talks with Prime Minister Ranil Wickremesinghe and other officials in Colombo.

Questions were raised regarding the partners of the oil refinery as Oman last week denied reports of being part of a $ 3.85 billion plan to build an oil refinery in Hambantota after the Government announced that such a deal had been signed.

The BOI said that they were aware that Oman Oil Company had registered their firm intention to participate in equity up to 30%, subject to reaching agreements between the parties.

Furthermore, they were aware that Oman Trading International was willing to supply the entire feedstock requirement of the project as well as do the marketing for the products, upon reaching mutually agreed terms.

The investor, Silver Park International (Pvt.) Ltd., conveyed to the BOI their full confidence in implementing the project.

Cabinet scheduled to meet next week

June 13, 2019 byEaswaran No Comments
The cabinet, which did not meet this week, is now scheduled to convene next week.

April 4, 2020 byTSM Web Desk No Comments
The Police have arrested 12,465 persons so far for violating curfew rules, according to DIG Ajith Rohana.