OMP report to be submitted to cabinet for approval 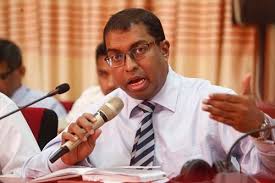 The interim report by the Office on Missing Persons (OMP) will be submitted to Cabinet for approval.

The report was submitted to President Maithripala Sirisena and Prime Minister Ranil Wickremesinghe this week and was made public afterwards.

OMP Chairman President’s Counsel Saliya Pieris told The Sunday Morning that President Maithripala Sirisena had said that he will submit the report to Cabinet.

He said the President and Prime Minister gave positive responses to the interim report but there was no timeline as to when the recommendations will get implemented.

Saliya Pieris said that in order to ensure the recommendations in the report are implemented, there needs to be a push from civil society as well.

The OMP has recommended that state officials, including members of the armed forces and police who are named as suspects or accused in criminal actions relating to abductions and enforced disappearances, be suspended pending the final determination of such cases.

The recommendation will put the spotlight on military officers like Major General Shavendra Silva who commanded the 58th Division during the last stages of the war, and was promoted by the current government as the Sri Lanka Army Adjutant General.

The OMP report recommends that steps be taken to ensure suspected officials are not transferred, promoted, or offered any other office in the armed forces, police, or the public service while cases against them are pending.

“Some individuals suspected of having committed enforced disappearances and related offences are being permitted to remain in positions of power — especially within the armed forces and the police — where they can influence the progress of an investigation. There have been instances where members of the armed forces, who were willing to provide information on disappearances, were subject to harassment. The OMP notes, with concern, that in at least one case, an officer of the armed forces who is a suspect in an ongoing court case relating to abductions and enforced disappearances, has neither been suspended nor removed from exercising the duties and functions of his office,” the OMP said in its report.

The interim report urges the Government to provide adequate material and human resources to law enforcement officials, the Attorney General’s Department, as well as the judiciary to investigate, prosecute, and punish perpetrators of enforced disappearances.

The establishment of the OMP marked a significant milestone in the efforts of the Government of Sri Lanka to address the issues of the missing and the disappeared.

Established under the Office on Missing Persons (Establishment, Administration, and Discharge of Functions) Act No. 14 of 2016 as an independent commission, the OMP’s objectives are to trace and search for the missing, make recommendations towards non-recurrence, ensure the protection of the rights of the missing, the disappeared, and their relatives, and to identify proper avenues of redress.
With the appointment of the OMP Commissioners in February, the operationalisation of the Office commenced. The process of operationalisation includes designing and setting up units and regional offices, hiring staff, and developing policies, rules, and procedures.

The OMP also engaged in public consultations with the families of victims and held confidential meetings when requested by affected families. In order to secure expert knowledge required to perform specialised tasks, such as forensics, legal, and archiving of data, the OMP consulted with national and international organisations and experts, and also established key relationships with several government bodies.

Furthermore, the OMP is engaged in inquiries on specific cases, supporting the ongoing excavation and exhumation of a mass grave in Mannar, consolidating existing records of missing persons, and preparing recommendations and clarifications on legal issues affecting victims and families.

The interim report says the challenges faced by the OMP are many and need to be balanced with the urgency of the needs of families of victims enduring years of physical and mental suffering. The failure of successive state institutions to provide families with truth, justice, and reparations has created a deep distrust of the State and by extension the OMP.

The OMP recognises the multiple needs and positions of various families and the importance of securing their trust.

The report says that for the OMP to be effective, it requires the active cooperation of other arms of the State.

June 25, 2020 byTSM Web Desk No Comments
A new PCR testing laboratory with a capacity of 500 tests per day has been established at the Colombo East Base Hospital in Mulleriyawa with emergency funding from the Asian Development Bank (ADB), ac