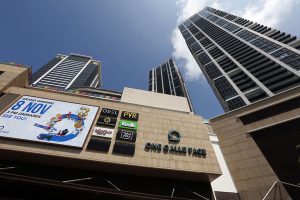 Malls have always been considered a destination, a one-stop shop for most of life’s daily essentials and a place of social interaction driven by custom experiences. In today’s technology-driven world of online stores for clothes, food, electronics, and other goods, the need for malls to focus on experiences is vast.

This change in the retail market has led many brands moving their stores online. However, malls around the world have found ways to attract foot traffic, making sure their tenants stay in business. In order to enhance the shopping experience, malls now offer a verity of amenities, concepts, and experiences to their consumers.

Some of the most common amenities available in malls internationally include popular restaurants, bars, salons, cinemas, and fitness centres. In order to add further value to their experiences, malls often boast seasonal or permanent decorations that act as a photo opportunity for most mall-goers.
These international mall trends have now made its way into Sri Lanka, with malls such as the country’s latest, One Galle Face, going that extra mile to reach international standards.

The seven-storey mall is Sri Lanka’s first internationally developed and managed mall, hosting over 250 retail outlets and over 50 food and beverage (F&B) outlets. The mall is also the Shangri-La Group’s largest venture to date in South Asia, boasting an investment of $ 608 million, and first opened its doors on 8 November 2019.

Despite being the largest international mall in Sri Lanka, hosting an area of 480,000 square feet, the mall has managed to target several consumer markets by designing an experience that caters to everyone. These markets include the high-end clientele as well as people looking to do their weekly grocery shopping. This is due to the variety in its vendors that span from David Gram Stores to Michelin star-rated restaurants.

Within just two months of opening, the mall is now also a hotspot for tourists, including those who stay in the Shangri-La Hotel and general tourists as well. The mall has even been added as a tour destination by several tour companies, as seen by the buses filled with tourists entering the mall.

This food hall is also home to Food Studio, a unique food court built to resemble a city in Singapore. Each pathway in the food court represents a street in the Singaporean village, such as Arab Street and Indian Street.

The next level of the mall, level one, is dedicated to all the international brands, housing both retail and F&B outlets. Some of the bigger names include Omega, Rolex, Charles and Keith, and Diesel, to name a few.

Going into level four, consumers are once again given a unique experience, as the floor is dedicated to mothers and children. Level four also houses Colombo’s biggest immersive play area, Adventure Zone, for children between the ages of two and 12, and is both owned and managed by Shangri-La.

The Adventure Zone and a separate kiddie rides area come equipped with trained staff who take care of children while parents walk around and go about their shopping.

Apart from kiddie stores, level four also houses spas and salons for moms to indulge in while their kids play. 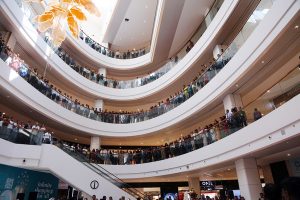 Level five is another lifestyle-themed floor and comes equipped a unique gym, called Trainyard, that caters to different fitness trends with classes conducted by professionals in the field. The gym is both owned and managed by Shangri-La and opens up consumers to a whole new market.

This floor also hosts a new concept that looks to bring the Pettah Market under one roof. This concept brings vendors you would otherwise find in the streets of Pettah, such as local craftsmen and trinket sellers, street food vendors, and costume jewellery vendors into a more convenient indoor location. The layout of the area these vendors occupy is different from the rest of One Galle Face, as it somewhat replicates the streets of Pettah.

Coming to level six, consumers will be greeted by more F&B outlets and restaurants, alongside an outdoor atrium and balcony area. This floor also has the mall’s cinema, which is operated by PVR, one of India’s biggest cinema operators.

The cinema hosts nine screens in total, with two unique theatres – Luxe and Playhouse. Luxe gives customers a more lavish experience with F&B and comfortable seats, while the Playhouse is a theatre dedicated for children, sporting kid-friendly seating, colours, lighting, and even two slides which can be used to get to the front rows.

The mall focuses on giving people ample room to walk around and experience its amenities, including the four atrium spaces which host several entertainment events. These events include seasonal events such as the ones seen during December, where the mall hosted several Christmas-themed events.

The mall takes security very seriously, as seen by the checkpoints in all of its entrances, including the one leading in from the Shangri-La Hotel. These checkpoints come equipped with x-ray machines, handheld scanners, and several security professionals who scan and screen every walk-in guest. Mall security also patrols each of the floors on an hourly basis to ensure no unwanted activities take place, and do not hesitate to escort people exhibiting any inappropriate behaviour out of the premises.

Since its opening, the mall has been packed, especially on weekends, when the line to its car park stretches the length of the road leading to it. Evidently, and perhaps needless to say, the One Galle Face Mall is a welcome addition to Colombo’s entertainment scene, which, although has many options on offer for those new to the country, can leave locals craving new forms of entertainment. At least for now, Colombo’s satisfied.

The rare window of opportunity for pension reform

July 22, 2019 bythemorninglk No Comments
The inconvenient truth about pensions is that they are costly. Looking at Sri Lanka’s government sector pension, it is glaringly obvious that the costs associated with this scheme are exorbitant.