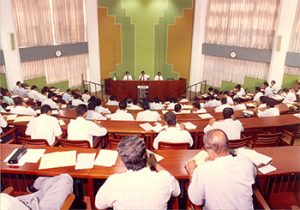 Using the first-ever online Colombo Tea Auction held yesterday (4) as a starting point, the tea industry plans to continue to hold online auctions even after the Covid-19 outbreak is contained.

This was revealed to The Sunday Morning Business by Ceylon Tea Traders’ Association (CTTA) Chairman Jayantha Karunaratne, who added that plans to conduct online tea auctions have been in the pipeline for years but it was never done.

“Even though this was in the pipeline, (the) global pandemic encouraged us to do the auction immediately online. We barely had a week to prepare. But we are going to continue this and call online auctions in the future also,” Karunaratne added.

The Colombo Tea Auction partially began auctioning online on Friday (3) for the first time in the history of Sri Lanka. On Friday, there were a couple of mock auctions being opened, but the auction went fully online yesterday morning. Approximately four million kilogrammes of tea was auctioned.

Karunaratne said that the industry is trying to move forward from the traditional auction system of shouting bids and being physically present, to an electronic platform which can be accessed from people’s respective offices or remotely.

Karunaratne noted that an online auction was challenging and problematic to a certain extent as they had to teach people how to take part in online auctions. However, he added that in going online, they received immense support from the Sri Lanka Tea Board (SLTB) and other relevant authorities.

The first tea auction in Colombo was held in July 1883. Prior to this, Ceylon Tea was shipped to the London Tea Auction or sometimes directly to overseas buyers. A decade later, the Ceylon Chamber of Commerce (CCC) set up CTTA to formulate rules for the conduct of the tea auction. The Colombo Tea Auction grew to be the largest tea auction in the world in terms of the number of lots sold.

Meanwhile, former MP Dr. Harsha de Silva said on his Facebook page that he was happy to see the online auction taking place, even 18 years after CTTA first signed a memorandum of understanding (MoU) with him to “automate” the Colombo Tea Auction.

“My solution had pretty much all the features that the physical auction had and a whole lot more that allowed the buyers to create unseen efficiencies in their buying strategies to match their blends using the various possible combinations.

“But, as is the case most of the time, innovation is blocked. Those who are used to tradition find it so hard to change. Multiple blocks by many who just didn’t want to change created issues for all of us, and the project fell through.”

Meanwhile, SLTB Chairman Jayampathi Molligoda told us that with the urgent need to revive tea development plans amidst the pandemic, SLTB revised their plans for short, medium, and long-term implementation, and online tea auctions is one of them.

“We are in the process of asking the private sector to implement these plans. One amongst them is to continue the auction because we are supposed to maintain social distancing. Quickly, they arranged an electronic platform to conduct the auction. So, we cannot take risks in gathering all these people together. That is why they arranged this e-platform,” Molligoda stated.

Sri Lanka’s tea exports were recorded as Rs. 240.6 billion in 2019, a slight increase of Rs. 9 billion compared to a year ago. Sri Lanka is the world’s third-largest tea exporter with 19% market share. Sri Lanka exports green tea to more than 40 countries. The major buyers are the United Arab Emirates, the Russian Federation, and Jordan.

May 10, 2020 byCharindra No Comments
Rendered helpless due to the directive from the TRCSL to not discontinue any telecom services due to non-payment, telecommunication service providers are becoming increasingly concerned.