Opposition claims Govt. lost Rs. 538 b due to VAT slash 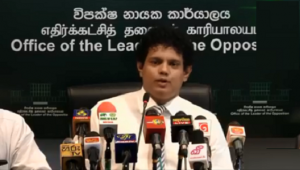 The opposition today claimed that the Government has lost a revenue of Rs. 538 billion due to its decision to reduce Value Added Tax (VAT).

UNP Parliamentarian Hesha Withanage made these comments during a press conference today.

He further noted that international lending agencies are refraining from providing loans to the government due to the revenue loss that has occurred as a result of the new tax cuts.

He added that many lending agencies are demanding a risk payment be made in addition to loan installments and interest payments.

Withanage further claimed that there is a risk to Samurdhi payments and government salaries due to the major income loss to the treasury.

President Gotabaya Rajapaksa’s new government slashed the VAT rate from 15 per cent to 8 per cent, and introduced a rage of tax concessions in November last year.

The Government says tax cuts is expected to be largely offset by action taken to eliminate unproductive current expenditures and revenue generated through the boom in the economy as a result of such concessions.

However, the government has not officially communicated the loss of revenue to the treasury as a result of the tax cuts.