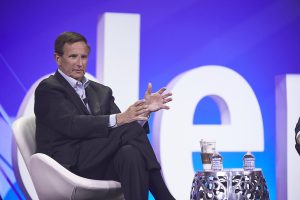 Tech giant Oracle Corporation has set its sights on capturing the market share of smaller players in the on-premises software market to become the leading Software as a service (SaaS) provider in the world.

Joining the company’s annual Media Days on Wednesday (1 May) at Oracle Headquarters in San Francisco, USA remotely via telecon, Oracle CEO Mark Hurd told reporters that the market is highly fragmented, which Oracle sees as an opportunity to strengthen its position.

“The biggest players in the back office on-premises market have only 24% and 21% market share respectively,” he said, in the discussion which was moderated by an Oracle executive.

These top two players, SAP SE and Oracle itself, are followed by a number of vendors with much smaller shares of the global enterprise resource planning (ERP) market.

Hurd pointed out that most of these companies have a market share of 3% or less, which made them vulnerable to being absorbed by the bigger players through mergers and acquisitions (M&A).

“We have a long list of underfunded players with 1 or 2% market share who don’t have the financial muscle to move to the more modern capabilities the customers are expecting so we have an opportunity to gain that share. It’s a long tail. They have small amounts of R & D most of them are funded through private equity,” he said.

According to Gartner, SaaS represents a $74 billion market and will account for 46% of the total apps software market by 2021.

Hurd forecast that the eventual leader in the SaaS market would have a much larger share of the market than 24%, and highlighted the rapid growth Oracle has made in this market.

“Over the last 3 years Oracle has gained more market share in SaaS than anyone else and has become the leading enterprise SaaS vendor in North America,” he said.

The statistics back him up. As per IDC Public Cloud Services Tracker, April 2019, Oracle gained the most market share globally out of all Enterprise Applications SaaS vendors three years running, in CY2016, CY2017 and CY2018. Furthermore, according to the IDC Semiannual Software Tracker, April 2019, Oracle is the #1 Enterprise Applications vendor in North America in both CY2017 and CY2018 based on market share and revenue.

Hurd noted that the migration of the on-premises market to SaaS would result in a massive expansion of the cloud market as SaaS absorbs hardware, database, middleware, among other things, resulting in an exponential growth of the market.

The company’s revenue from applications, $11 billion in FY 2018, could be doubled to $22 billion by simply migrating its existing customers’ on premises business to SaaS, claims Hurd.

“They move their data centres, servers, storage, database and middleware etc. to us so we end up doing more than we do now. Therefore, customers end up saving around 30% which is an extremely attractive value proposition for them. It is also attractive for us as just moving our existing user base from on premises to SaaS would roughly double our application revenue.”

This would be possible, he said, because every dollar of on-premises support paid to Oracle could potentially be converted into $3 to $4 in a SaaS arrangement. The 30% saving for customers comes about because they are spared the expenses of purchasing all those things a la carte.

Announcing Oracle’s FY 2018 Q4 results Chairman and CTO, Larry Ellison revealed that this process has already begun with some of the company’s biggest customers.

“Some of our largest customers have now begun the process of moving their on-premises Oracle databases to the Oracle Cloud. For example, AT&T is moving thousands of databases and tens of thousands of terabytes of data into the Oracle Cloud. We think that these large scale migrations of Oracle database to the cloud will drive our PaaS and IaaS businesses throughout FY19.”

Currently, the Oracle Business Cloud has over 1,100 cloud applications and organizations of all sizes can take advantage of this integrated suite of applications to break down silos, quickly and easily embrace the latest innovations, and improve user engagement, collaboration, and performance.

Answering a reporter’s question, Hurd said that while Oracle is focusing heavily on upgrading its existing customers to the cloud, it will also be aggressively pursuing the migratory market from on premises to SaaS in general.

“Roughly speaking, half of our applications customers we have today on our cloud were not existing oracle customers. They are not conversions. I look at the opportunity to gain market share and to modernize all these older applications, whether they are existing oracle customers or not, as an extremely exciting opportunity,” he said, adding that this focus is clearly visible in the fact that the company has “tripled its application sales force” over the years.

Creating awareness about the possibilities of cloud is a key component of this strategy for Oracle, for the benefit of businesses who may have been unable to keep abreast of rapid technological advancements over the past few years.

“Around 15 years ago when these decisions were made regarding back office systems most people never thought they would have to make another decision. A lot of customers don’t know about all this machine learning, blockchain, AI and automation and that is because of the speed with which the market evolved over the past 15 years and all the innovation that has come in just in the past 4 to 5 years,” Hurd said.

Hurd also spoke about the popularity of hybrid models adopted by businesses to enjoy the best of both worlds, by combining on premises and cloud services, saying that these businesses would increasingly be skewed towards cloud.

“I think the hybrid model will persist but there will be increasingly less of it on premises and more of it on cloud. Getting people to nimble architectures from static, fixed cost architectures is the key. Everybody’s going to want to move to modern applications when they can and that’s going to be SaaS and cloud.”

In spite of challenges and roadblocks, Hurd predicted that around 40% to 50% of all business operations would be in the cloud in a few years.

“There are going to be certain workloads and certain industries which will have regulatory issues which may slow down the move to the cloud. Still, by the early part of the next decade you will see 40 to 50% or more of all workloads in the cloud. Just last year alone 15% or 17% of all data centres closed.”

Moving on to the performance of Oracle, Hurd announced that NetSuite, a key pillar of Oracle’s cloud ERP offering, has seen exponential growth largely due to the strength of the US economy. NetSuite is a unified business management suite encompassing ERP/Financials, CRM and ecommerce which serves more than 16,000 customers and was acquired by Oracle in 2016.

“The US is doing very well with companies getting an infusion of capital and they’re investing. The growth rate of our NetSuite business, which is sold mostly to small and medium sized businesses, has increased over 10 fold over the past year and that has a lot to do with increased investment from companies, in addition to the good things we have done.”

The US economy recorded 3% GDP growth in 2018 and 3.2% growth in 2019 1Q, and Hurd noted that the economic environment is much better than it was 3 to 4 years ago. He added that tech had benefitted mainly through the growth in consumer business as opposed to B2B market.

Looking ahead, 2019 should be an even better year for the industry, with worldwide IT spending projected to total $3.76 trillion in 2019, an increase of 3.2% from 2018, according to the latest forecast by Gartner. As global IT spend includes Telecommunications, what is more important for Oracle is that Gartner expects businesses to increase spending on enterprise application software in 2019, with more of the budget shifting to SaaS. Enterprise software is set to continue its strong growth, with worldwide software spending projected to grow 8.5% in 2019 and another 8.2% in 2020 to total $466 billion.

June 10, 2019 bythemorninglk No Comments
The Consumer Affairs Authority is in the process of compiling a report on the activities of the 230-plus Halal-certified businesses in Sri Lanka in response to demands from the industry and consumers.