Our concern is the game, not the clubs – Lasitha Gunaratne 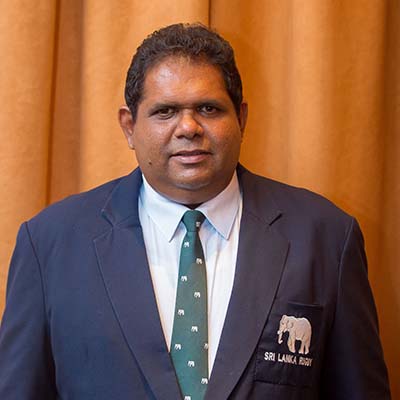 The Sri Lanka Rugby Football Union’s (SLRFU) recent decision not to allow foreign players in the upper-division clubs at the domestic tournaments has created uproar among leading rugby clubs of the country.

SLRFU President Lasitha Gunaratne, talking to “The Sunday Morning” on Tuesday, 11 September defended their decision saying ‘the SLRFU is concerned only about the game, not the individual clubs’.

“We made the decision to allow getting the services of a foreign player only for the lower division teams purely because the gap between the top and the bottom divisions were becoming very large,” explained Gunaratne.

“The difference was so evident that the competitions over the years were becoming very predictable and lackluster. So, our main sponsor, as well as the club sponsors, wanted a change in rules to make the tournaments more competitive and interesting,” added Gunaratne who took over rugby’s top-seat from Asanga Seneviratne a couple of months ago.

“In fact this was a decision taken by the rugby Council which is represented by the clubs. I know some of the top-tier clubs don’t like this decision. But we have a system which is as old as nearly fifty years. It’s high time we update those rules and move forward,” Gunaratne further added.

“Our prime concern is only the good of the game, not the individual clubs.”

Some leading clubs are vehemently opposing the SLRFU decision.

Views of the clubs –

Meanwhile Chairman, Havelocks SC, Romesh Abeywickrema told “The Sunday Morning” that his club expected the SLRFU to rethink its decision on overseas players.

“We are one club that oppose this decision. It’s not fare by the clubs to have restrictions on their foreign players. There are some upper-division clubs that want to pull out of the domestic tournament as a means of protest. We won’t pull out but we will strive to overturn this decision by holding discussions with the SLRFU,” said Abeywickrema.

Gunaratne also added that there is always space for reversal of the decision as the SLRFU Council meetings are held monthly. If the majority of its membership resolves to change their decision, the SLRFU is always willing to accept it.

“But if some clubs are protesting and are adamant that they need foreign players, then what they can do is to demote themselves to the lower group and win matches next year, with the help of their overseas players. Then they may climb up to the upper league once again in year 2020,” quipped Gunaratne.

IPL in UAE, not SL

July 20, 2020 byTSM Web Desk No Comments
The Board of Control for Cricket in India (BCCI), the organisers of the Indian Premier League (IPL), are reportedly considering hosting this year’s tournament in the UAE due to its more flexible quara