Our lopsided economy and the middle-income trap

By Dinesh Weerakkody
President Gotabaya Rajapaksa, speaking at the 72nd Independence Day ceremony at Independence Square recently, said: “The public will only achieve true freedom when social and economic inequalities are minimised”. Even today, he said, “there is a large gap between the haves and have-nots in our society”.

To emphasise this point, the President said the facilities available in our urban centres are lacking in rural areas and that the educational and healthcare facilities are not equal in most areas. Further, he pointed out that job opportunities have not spread to all regions, and that these inequalities are not due to racial or religious reasons, and are common problems the country faces. 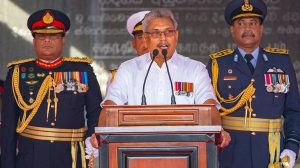 However, he noted that in order to strengthen the ability of people to live freely, we must first address the economic problems that affect the public. That is why he asserted that the eradication of poverty is a top priority of the Government. Also, migration in search of employment and better livelihood will continue unless we address this lopsided development happening across rural Sri Lanka.

However, as a country, to get to the next phase of development in order to address these issues, we need to first get out of the middle-income trap, which is when a country’s growth slows after reaching middle-income levels. According to IMF (International Monetary Fund) and other data, Sri Lanka in the last 10 years has added $ 37 billion to its GDP, while Vietnam added $ 158 billion and Bangladesh added $ 217 billion. Taiwan, with a similar population as Sri Lanka, added $ 107 billion.

One of the main reasons why Sri Lanka is caught in the middle-income trap is because we are not investing sufficiently in early childhood development and skilling its workforce properly. If this segment is helped with targeted education loans or given other support, they will get the skills they need. This has been a critical element of other countries that have broken out of the middle-income trap. Also, the current poverty alleviation programmes need to be resourced creatively because they provide too few funds to make a genuine impact on the lives of the recipients.

Most countries around the world struggle to implement good policies and only a few have succeeded in reaching high-income status and sustaining that growth. Take Turkey for example, it was growing towards high-income status but then experienced a huge slowdown, or Argentina, which reached high-income status but fell again to middle-income status because of policy and political uncertainty. Countries like Poland and Taiwan, which moved through the middle-income trap, swiftly did so because their economic growth was inclusive, jobs and salaries increased, inequality across income groups and provinces reduced, education levels increased, and poverty declined drastically.

For a start, it is important to get the public institutions – economic but also political – right and guide reform with a shared vision. Countries like Poland sustained its high growth with a performing democracy – one that supported a socially responsible market economy. Such a vision facilitated remarkable policy continuity spanning 18 governments since democratisation. Therefore, the creation and strengthening of the structures of basic democratic institutions at the local and national levels is critical. The support structures help create a political consensus for deeper economic institutional change and sustainable public finances.

Then, ensuring macroeconomic stability is key to keeing inflation and public debt under control. Integrating local markets into global markets helps increase national competitiveness. We need foreign direct investment (FDIs) to enable our domestic firms to participate in international value chains and expose them to the international markets, which will provide access to better inputs, capital goods, technological transfers, good reforms, and solid investments in human capital, which can result in large gains in educational attainment and ensure broad-based access to quality education across all income groups and regions to pull people out of the poverty trap. Creating competitive and open markets is required to provide business opportunities for firms and jobs to increase business growth and also earnings. Their prosperity will generate demand for goods and services. Opening up to global capital intelligently will give the economy a massive boost. The country needs to shift resources from low to high-productivity sectors for exports to make the transformation.

As the President rightly pointed out on Independence Day, the Sri Lankan economy needs a fresh spurt and needs to rise as a whole, not in parts only. Achieving and sustaining growth requires the mass mobilisation of financial as well as human capital. If not, large sections of the population will not see their lives improve and will be left behind. Therefore, the quality of healthcare, education, affordable housing, and skills development for the deprived masses is a must.

In the interim, policymakers must not use the trap story as an excuse for poor short-term economic growth. The country should do all it could for a much-needed upsurge in economic activity. Failure at this stage could leave Sri Lanka stagnant in a lower middle-income bracket, even as Asia strives to catch up with the West and overtake them. If this is to be an “Asian century”, despite all the challenges of poverty, trade barriers, and disease in the region, we must surely stay in the reckoning. And we surely can.

(The writer is the Chairman of Hatton National Bank, the National Human Resource Development Council of Sri Lanka, and Cornucopia Sri Lanka. He is also a former Chairman of Commercial Bank of Ceylon PLC and the Employees’ Trust Fund Board)

February 16, 2020 bythemorninglk No Comments
Asia Securities analyses what impact Coronavirus could have on Sri Lanka, considering China is a significant source of tourism and key raw materials for local industrial production and agriculture.

July 17, 2019 byCharindra No Comments
Sri Lanka is now officially an approved participant at the World Expo 2020 Dubai, known as the world's largest exhibition, as the Government recently signed the Official Participation Contract.