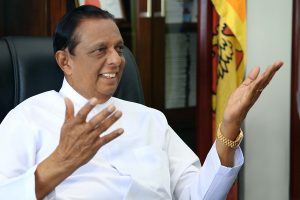 Sri Lanka Tourism is expecting the participation of over 25,000 tourists from around 40 countries, for the Bohra Global Convention that is set to take place from 1 September to 10 September.

During a press conference regarding the convention held today (22), Minister of Tourism Development, Wild Life and Christian Religious Affairs, John Amaratunga, stated that participants of the event have already started arriving at the Bandaranaike International Airport as of yesterday (21).

“This is a major breakthrough for our tourism promotions, to increase our numbers and also to increase the income that would come into the country from the tourism industry.”

Amaratunga stated around a 100 hotels and 200 apartments have currently been lined up for the tourist to stay in, in both the formal and informal sectors because of the large number of arrivals. He also confirmed that as of yesterday around 3,000 hotel rooms have been booked by the attendees, with more bookings set to take place before the start of the convention. These current bookings that have been made by the participants amount to around Rs.400 million.

“We are running short of rooms for this community that is coming to Colombo, and now we are frantically looking for accommodations in the informal sector, such as home stays and apartments that are not registered with the Tourism Development Authority”, said Amaratunga.

Due to the lack of rooms, Amaratunga stated that some of the tourists have also decided to stay in places like Negombo and Mount Lavinia, which would then benefit the hoteliers in those areas.

Amaratunga went on to explain that the tourist visiting Sri Lanka for the convention will also take the opportunity to tour the country and experience Sri Lanka.

“Most of the people who come to the convention would want to go out of Colombo to see what Sri Lanka can offer in terms of tourism.”

Bohra Global Convention is an annual convention that takes place around the world, and attracts thousands of participants from the global Bohra community. Sri Lanka has previously hosted this convention five times, with the most recent being in 2007 where it went on to draw around 12,000 participants to the country.

January 13, 2020 byTSM Web Desk No Comments
A. Bodaragama, who has served for over three decades in the Department of Excise, has been appointed its Commissioner General.

December 27, 2019 byTSM Web Desk No Comments
Kanchana Ratwatte has been appointed as the new Chairman of Bank of Ceylon (BOC).