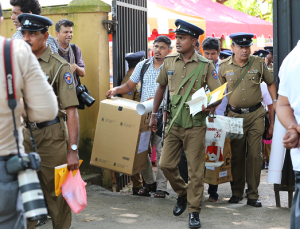 Over 68,000 Police & Civil defence officers have been deployed for the presidential polls scheduled tomorrow, the Police Media Unit said.

Transportation of ballot boxes and the preparation of polling stations for the election are currently underway.

The Police has provided special security to district selection officers who are assigned to transport ballot boxes to 12,851 polling stations island-wide.

Meanwhile, the polls body has requested all public servants, who are assigned for election duties, to perform their duties with utmost integrity during the voting period.

April 16, 2020 byTSM Web Desk No Comments
The onset of the inter-monsoon season has resulted in the National Dengue Control Unit (NDCU) urging the public to take necessary precautions to prevent a dengue outbreak in the country.

Rains to enhance within next few days

November 17, 2020 byNethmi Liyanapathirana No Comments
The prevailing showery condition is expected to grow over the island within the next few days, the Department of Meteorology stated.