Overton and Stone in England squad for Sri Lanka! 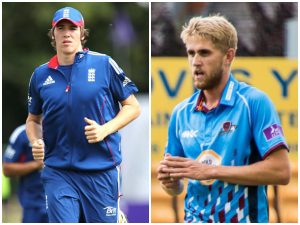 Jamie Overton and Olly Stone are under serious consideration for inclusion in England’s squad for the tour of Sri Lanka.

Overton and Stone, two of the quickest young bowlers in England, are understood to be of interest, not just with a view to exploiting Sri Lanka’s perceived weakness against pace, but with a view to the transition to life after James Anderson and Stuart Broad.

While Overton and Stone have both struggled with injury in the past, they are currently bowling with a pace and hostility rare in the English game. Stone, currently with Warwickshire, has claimed 33 Championship wickets at a cost of just 11.57 in Division Two this season, while Overton, whose twin brother Craig was part of the England squad in Australia and New Zealand last winter, has claimed 23 at 22.69 in Division One. Both are aged 24.

ESPNcricinfo reported a few weeks ago that the England management was considering resting either Anderson or Broad for the Sri Lanka tour. Of the pair, it now appears more likely that Broad will be rested – he is expected to be out of action for a month after cracking a rib while batting in the fifth Test – but it is understood no firm decision has been reached on either.

And while it is anticipated there will be at least three spinners in the England tour party – Somerset’s Jack Leach is expected to join Moeen Ali and Adil Rashid, the pair who played at The Oval – the management remain hopeful room can be found for at least one of the young fast bowlers.

England’s lack of pace was exposed during the last Ashes tour in Australia. While Australia’s pace attack found life from the surfaces, England’s more sedate line-up were rendered largely impotent. Both Overton and Stone are capable of bowling in excess of 90mph, with Overton also blessed with height that generates steep bounce.

The Test squad for the tour is expected to be named at the end of next week.

England in NZ: Bowlers fail to fire as tour match ends in draw

November 13, 2019 byTSM Web Desk No Comments
England's bowlers failed to impress as the two-day tour match against a New Zealand XI ended in a draw.