Towards a more comprehensive form of protection: The leopards of Wilpattu National Park

Over the last 10 years, Samarasinghe has conducted research on amphibians and on the taxonomy of the water monitor complex in South Asia. His current research focuses on human-wildlife conflict mitigation and carnivore/apex predator population ecology – the saltwater crocodile and the Sri Lankan leopard. He is a member of the amphibian, water monitor, and crocodile specialist groups of the International Union for Conservation of Nature (IUCN) Species Survival Commission.

The background of the Sri Lankan leopard

Samarasinghe shared that the Sri Lankan leopard is one of eight subspecies of leopards in the world, and is endemic to Sri Lanka. They are one of the most adaptable big cats in the world and are found from Africa right across Asia and into Java, with Java being the only other island in the world to have a leopard population. What makes leopards so adaptable is that they have evolved to become perfectly medium-sized big cats who require less protein to survive, and can feed on anything from dung beetles to giant elands. 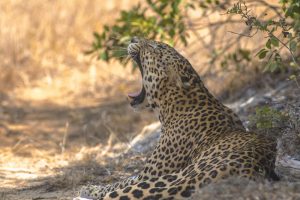 Sri Lankan leopards are found all around the country and thrive in habitats like scrub forests and monsoon forests. Sri Lankan’s total leopard population is estimated to be approximately 1,000 individuals. Research into leopards over the last 30 years has been hindered greatly by the Civil War, as many areas inhabited by leopards are war-torn areas.

The Wilpattu National Park, which is inhabited by a significant portion of Sri Lanka’s leopard population, is itself in a war-torn area and was closed for much of the Civil War, being closed from 1988 to 2003, and again from 2007 to 2010, and was reopened to the public after being thoroughly determined by the Army. The Wilpattu National Park is Sri Lanka’s largest national park and is also one of Asia’s oldest parks.

Samarasinghe spoke about a study on leopards that he conducted in 2018 at the Wilpattu National Park, sharing his results and observations with the audience, highlighting the importance of protecting these cats and their habitats. 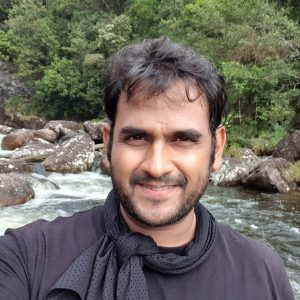 Samarasinghe shared that the main focus of the study was to provide reliable data on the leopard population within the Wilpattu National Park and the population’s dynamics within the park and surrounding areas. The study’s aim was to collect data that could be used to support conservation managers and help develop effective management plans for the future.

The primary tools used in the study were camera traps, where posts with cameras were set up to capture photographs of wildlife passing by using thermal motion sensors. Over the course of the study, Samarasinghe placed 85 traps covering 750 sq. km. of the Wilpattu National Park in areas known to have leopards present.

The study captured visuals of not just leopards but various wildlife. In total, the study captured 133 individual leopards (each leopard has unique spot patterns that make them identifiable to a large degree). Using the data found, the overall leopard population at the Wilpattu National Park was estimated to be approximately 355 leopards, with a female-male ratio of 1.5:1.

Using his research, Samarasinghe outlined some of the key issues that Sri Lankan leopard populations have to deal with.

Poaching is a major issue that leopards deal with, though this doesn’t mean that poachers are necessarily hunting leopards specifically. Samarasinghe explained that poachers are mostly after sambur deer and spotted deer and that in the process of stalking these deer, leopards sometimes get in the way and are hurt or killed. Samarasinghe urged the general public to forgo bushmeat in an effort to curb this demand and reduce poaching.

Communities around the park and their own respective development also pose a problem, Samarasinghe noted. The nearby fishing villages of Pukkulama and Palugahathurai, for instance, sometimes see conflict with leopards because of their proximity to the park.

Post-war development is also affecting the habitats of leopards and increasing the potential for leopard-human conflict. Samarasinghe spoke about the Pallenkandal Church and how it was expanding and increasing its festive activities shortly after the Civil War which had the potential to create all sorts of problems and bring unnecessary external pressure on the park in terms of potential human-animal conflict, pollution, noise pollution, and retaliatory animal killings when a loved one is harmed by an animal.

Another aspect of post-war development that affects leopards and national parks, in general, is the reclamation of land for developing communities, like when chunks of the Wilpattu National Park were cleared out to place IDPs (internally displaced persons). Other aspects of development like illegal roads being built through the parks also have a negative impact on animal populations and behaviour because of the disruption caused to animal travel patterns.

Another issue is buffer zones around the park being encroached on to build shops, houses, and villages and even to cultivate crops. Samarasinghe explained that there are strict laws to control activity in these zones, but these laws are not always followed.

How can we protect leopards and their habitats better?

Samarasinghe recommended long-term monitoring of leopard populations within the Wilpattu National Park and bordering protected areas and engaging different stakeholders, for example those involved in tourism, to contribute data that they capture like images of wildlife to allow detailed studying, not just of leopards but their prey as well. 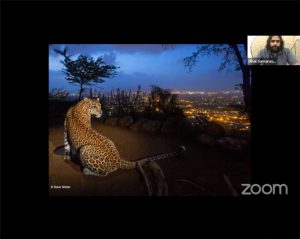 Samarasinghe also noted that the majority of research done is mostly conducted by private individuals who have a genuine passion for wildlife and that it would be good to see the State conduct more research into things like prey distribution in protected areas. Samarasinghe also shared that there needs to be a way of centralising and collating all the independent private research done so that more informed actions can be taken to protect habitats and wildlife.

Samarasinghe also noted that it was important to study the dynamics of human-leopard interaction in and around the park, looking at the different communities in these areas and their respective knowledge, attitudes, and practices because not all communities view leopards the same way.

Samarasinghe stressed the importance of eliminating poaching in and around the park, noting that there were 12 reported leopard deaths last year because of poaching activities. Samarasinghe noted that the Park Warden had taken drastic and commendable steps to curb poaching, getting the special forces and commandos involved in controlling the borders of the park and that now poachers can longer enter the park from the south. Samarasinghe hopes this will extend elsewhere soon too.

Hope for the future

Samarasinghe shared that while we are in a bad position at the moment, there is lots of hope for the future. He noted that it is high time politicians and officials pay attention and reset. On a positive note, Samarasinghe discussed the landmark ruling in the Wilpattu case when Justice Janak De Silva ruled that the State has a responsibility to preserve and protect the environment for the benefit of the common Sri Lankan, highlighting that the judiciary has this responsibility as well. Samarasinghe noted that this sends a strong message to the executive and legislature communities that the Constitution needs to be followed when it comes to environmental matters.

Dinal Samarasinghe’s lecture on the leopards of the Wilpattu National Park can be viewed in its entirety on the WNPS Facebook page.

A celebration of youth in poetry

January 27, 2019 bythemorninglk No Comments
Edward Lear was an English artist best known now mostly for his literary nonsense in poetry and prose, especially his limericks, his poems can be characterised by his irreverent view of the world.

September 23, 2019 byThe Sunday Morning No Comments
When the end of 2018 was dawning near, the United Nations Population Fund (UNFPA) and UN Volunteers (UNV), with support from the UN Peacebuilding Fund,