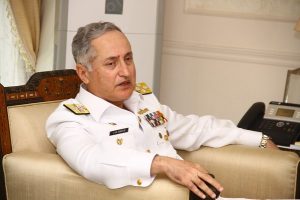 During his stay in Sri Lanka, Naval Chief will meet Commanders of the Navy, Army,Air force and Defence Secretary.

He will also call on Prime Minister Mahinda Rajapaksa.

Admiral Abbasi joined Pakistan Navy on 13 January 1979 and undertook initial training at Britannia Royal Naval College Dartmouth, UK. He got commission in Operations Branch in June 1981 and won the coveted “Sword of Honour”.

In recognition of his meritorious services, the Admiral has been awarded Nishan-i-Imtiaz (Military) by Government of Pakistan.