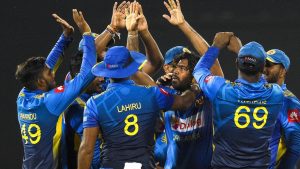 Pakistan’s hopes for Test cricket to return to the country have suffered a substantial blow, as 10 prominent Sri Lanka cricketers have refused to travel to Pakistan for the forthcoming limited-overs tour.

By hosting the limited-overs series first, the PCB had intended to prove to Sri Lanka players and officials that the nation was once more secure enough to host Test cricket, starting with the teams’ World Test Championship matches, presently scheduled for December. But with Niroshan Dickwella, Kusal Perera, Dhananjaya de Silva, Thisara Perera, Akila Dananjaya, Lasith Malinga, Angelo Mathews, Suranga Lakmal, Dinesh Chandimal and Dimuth Karunaratne all having pulled out of the limited-overs tour, its capacity to further the PCB’s aims are significantly curtailed. Even if this tour goes off without a hitch, Sri Lanka’s frontline Test players may remain unconvinced about the December tour. And, if that is the case, SLC is almost certain to refuse to play those Tests in Pakistan. While they can be convinced to send a weakened limited-overs side to the country, they are unlikely to do so for Tests that have Championship points at stake.

SLC had held a meeting on Monday with the players who were part of the preliminary squad for the tour, to inform them about the security arrangements in Pakistan, which the board itself is largely happy with. In fact, a former Sri Lankan Air Force Commander had conveyed his confidence in those arrangements to the players. But the board has ultimately respected the players’ wishes. According to an SLC release, chief selector Asantha de Mel had told players that refusals to tour Pakistan on this occasion will not affect their selection for future series.

Both the present ODI captain, Karunaratne, and the T20 captain, Malinga, have refused to tour.