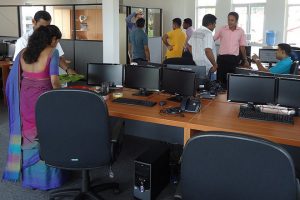 President Maithripala Sirisena has finally publicly uttered what the average Sri Lankan has known for many years now; that the great majority of politicians and their henchmen employed in the public sector, are useless.

According to Sri Lanka’s Head of State, who provided some very enlightening statistics at a school event in Nivithigala on Friday, 90% of today’s politicians are unfit for the job while a whopping 60% are, to quote his own words, “useless”.

The President however, did not elaborate as to which category he fitted in to or if he considered himself to be among the 10% who were fit enough for the job.

Nevertheless, if one were to consult a random citizen of this country to seek an answer to this question, the answer would most probably surprise the President.

In his Friday sermon, the President went on to reveal that 10% of the public sector workforce was also “useless”. He is probably well aware of the fact that politicians appoint their kith and kin and party loyalists to important government positions as reward for their loyalty. This is where the rot sets in, at the very top. These individuals hardly do any work, or in most instances do not even report to work, yet collect their monthly salaries and other emoluments.

The bloated public sector is estimated at about 1.4 million workers. Ten percent of that amounts to a hefty 140,000 individuals who are, for all intents and purposes, parasites feeding off the system; in other words, off the taxes paid by every single citizen of this country.

That does not mean that the other 90% are doing a fine job, because any casual visit to a government office will instantly show that this is not the case. Inefficiency, lethargy, and indifference to the job are the key attributes of the majority of state sector entities whose lopsided balance sheets should be an embarrassment to the political authorities in charge. One cannot blame the workers considering the hopeless leadership vacuum at the top.

So what is the way out of this mess and how do we as a country get about it? The President other than stating the obvious did not offer a clue as to what he intends to do to put things right.

Just imagine this for a moment. Here is a country that is being ruled by 225 politicians out of whom 90% are not fit for the job according to the President. Their decisions are then implemented by a workforce of 1.4 million out of whom at least 10% is effectively deadwood, again according to the President. Out of the 225 politicians, apparently less than 100 have passed the Ordinary Level exam, which is the most basic and lowest educational qualification. One that even a peon, clerk, or driver is required to possess in order to secure state employment. What, other than disaster, could be expected of such a mediocre setup?

This unproductive, useless system survives on the unbearable taxes that are imposed on the ordinary people. For instance, a labourer who earns a daily wage may not be liable for income tax but he very well pays his taxes when he buys a half-bottle of arrack at the end of the day, pumps a litre of fuel to his bike, or consumes parippu and paan at a kade.

Meanwhile, the “worthless” politicians are fighting to order luxury vehicles and to get millions passed in supplementary estimates in Parliament to repair and renovate their official residences with less than a year to go for an election.

For 70-odd years after independence, we have hitched our fortunes to a handful of political parasites who have not hesitated to use and abuse the system for their benefit. In recent times, this abuse has become the norm and has been institutionalised on the pretext of security issues. More issues the better it seems for these parasites, for it gives them the opportunity to plunder more.

It is not surprising therefore, that the same names keep surfacing, election after election and it’s the same circus that performs with only the method of plundering that invariably changes.

There is no way that Sirisena, Wickremesinghe, Rajapaksa, or any other will let go of their positions of their own free will unless forced to do so by the people or party faithful. That is how alluring the gravy train really is. What they don’t realise (or well may), is that it is their own acts of commission and omission that feeds and sustains this useless political system that is of little use to the people. If at all, it is a monumental burden on both the country and its hard working people.

The time for change will come sooner than later as the more agile, demanding younger generation begins to challenge the system and demands performance from where it’s due. Be it a government office or a member of Parliament, people will begin to demand answers to their issues. They will demand that the right people be given the right positions and demand targets and goals. For instance, with tourism suffering a huge setback after the Easter Sunday attacks, the country’s embassies and high commissions dotting the globe should be proactive in getting the message across – the country is now back in business.

But will this ever happen when clueless, incompetent political lackeys are appointed as the country’s representatives in foreign capitals? Except for a handful, the vast majority is in it for the ride and the perks that go with it.

What is becoming increasingly clear as correctly pointed out by the President, is that the age of useless politicians and useless public servants is coming to an end. A well-informed younger generation with access to social media will be the driving force behind this change.

Seventy years is a long time to put up with a putrid, dysfunctional system that hurts the people more that it serves them. The day that people demand accountability from everyone that feeds off the system is not a long way off. That then, is the silver lining, the ray of hope, in this parasites’ paradise.

May 19, 2019 bythemorninglk No Comments
Sri Lanka marks 10 years since the end of the brutal war this weekend, but the country is yet to fully recover.

March 31, 2019 bythemorninglk No Comments
Construction of the proposed controversial $ 3.85 billion oil refinery project in Hambantota has begun, but a 99-year land lease agreement is yet to be signed.