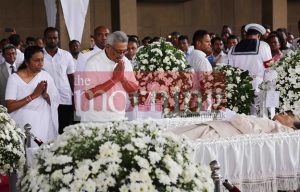 The remains of former Prime Minister D.M. Jayaratne was brought to the Parliamentary complex today.

The final rites are due to be conducted at the Doluwa Grounds in Gampola on Saturday.

February 28, 2019 byRandev No Comments
A group of monks visited the Attorney General's office today and submitted a petition stating that allegations made against the venerable Galagoda Aththe Gnanasara Thero are false

December 17, 2018 byRandev No Comments
United National Party Leader Ranil Wickremesinghe was sworn in as the Prime Minister before President Maithripala Sirisena at the Presidential Secretariat yesterday.