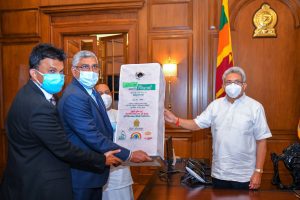 The first container designed for this purpose was handed over to President Gotabaya Rajapaksa by Minister of Environment Mahinda Amaraweera at the Presidential Secretariat on Monday (26).

The programme, which is aimed at educating students, has been named “Api Hedee Rata Hadamu”.

The quantity of carbon pen tubes discarded from schools per day is around 80 kg and is estimated to exceed 29,000 kg per annum. The quantity discharged from public and private institutions is yet to be calculated.

Environmentalists point out that used pens and toothbrushes take between 100-500 years to decay.

In this regard, plans are underway to provide special containers to each school, after which Wex Industries Plastics Ltd. will purchase these plastic items, the PMD added.

Meanwhile, Amaraweera has stated that a cabinet paper will be submitted to make the implementation of the programme mandatory in both public and private entities.

PNB officers and drug traffickers: PCoI given copies of recordings

March 23, 2020 byTSM Web Desk No Comments
Public seen maintaining a 1 m distance between persons in supermarket and ATM queues in some areas where curfew was lifted this morning.