‘People made fun of me’: Janani Cooray on performance art and the Lankan perception

December 2, 2020 by Dimithri Wijesinghe No Comments 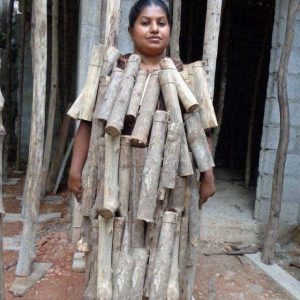 Janani Cooray in a wooden dress

Cooray shared that she came across Cai Qing via a number of international art programmes she has taken part in and she shared that he himself proposed that she too make some submissions. She said the guidelines were to simply upload a photograph of your work to Facebook and tag him.
She shared that curating the works posed quite the challenge as it is a medium which often requires an audience and also several materials and other means like technological assistance – for example she could not have access to a camera person to capture her performance. However, she said that whenever relief was allowed by the Government, such as the lifting of lockdown specifications, she went to work on her projects.

The nine works put forth by Cooray have received some attention online; unfortunately, there was an overwhelming amount of negativity directed towards her works as well. “A few of my colleagues and those who were close to me shared some humorous memes which have been created using my images and I brushed those off. After all, memes too are a form of expression.” However, she said that as time went by, the negativity picked up and there were many who had misunderstood her work and were of the assumption that she was a “mad woman”. 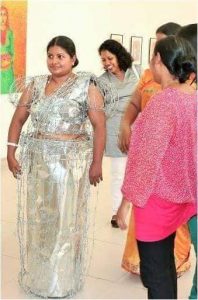 She said that participating in the Shared Crisis campaign were multiple others, but to her knowledge, she was the only one from Sri Lanka and yet, she was the only one who suffered ridicule at the hands of her countrymen, whereas the other artists did not have to deal with such misunderstandings and malicious criticism. She said that she was deeply hurt by a number of the comments, especially those coming from educators; as she herself is an educator, she shared that she would never have expected such actions from professionals.

We asked Cooray about her thoughts on the average Lankan person’s capacity to appreciate performance art and whether she believes that despite the uncertain climate right now, it will slowly improve during the passage of time. She shared: “It will take some time. It is certainly better than back when I first started in 2003. However, it is slow-going.” She added that Lankans are hesitant to accept new concepts. “They are very set in their ways; whatever that is new – it irks them. They are not comfortable and therefore they lash out.”
She said that from her experience, Sri Lankans are rather limited within the constraints of tradition and culture; they are unable to break out of their bonds. She shared that this is likely why there is no culture of art appreciation if it is not a traditional medium, for example like theatre, cinema, drawing, painting, etc.; but, even then there is only a certain part of society who have gate kept those mediums as theirs for appreciation and enjoyment and the rest are considered either unable to or have decided at the offset to be not their cup of tea.

Cooray also spoke of an ongoing annual project titled “SPACE’’ – a women artists’ visual art exhibition – which was held in the J.D.A. Perera Gallery for the past seven years consecutively. She has conducted the exhibition in the hopes of encouraging women in art and she shared that most of her artist works are focused on the issue of feminism, in which she attempts to generalise her own experience socially.
“In my performance work, I engage in expression, adding various colours and material to my body. Sometimes, the characteristics of the land become part of my performance art. In my performances, I have made the shape and colour of my body a primary element. And through a feminist perspective, I have addressed women’s as well as cultural, political issues. However, recently, my favourite practices are about expressing simple ideas with a primary focus on material usage, without a repetitive confinement to a dialogue about gender and culture,” she said. 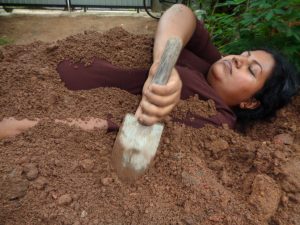 About her submissions for the Shared Crisis campaign, we asked Cooray to please shed some light on a select few of her pieces, and she chose to take us through her piece titled “Burial by Myself”, which was what sparked online frenzy and was even shared by Jayaratne Funeral Directors (Pvt.) Ltd., as something that was just humorous.

She shared that in her concept note for this particular piece, what she hoped to convey was not the physical burying of the body but the burial of self and expression by cultural and social norms. She shared an example from her own experience; when she first joined the University of the Visual and Performing Arts, as many do, she too had a vision to become a renowned artist who was free to express herself through her chosen medium. However, due to the many constraints she is unable to live as a free artist and has had to make a commitment to teaching and becoming an educator, despite being an artist. 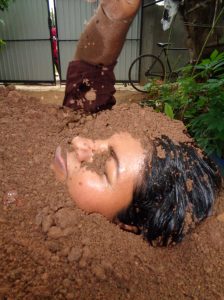 She also took us through another piece – the “Wooden Dress” – which was essentially the doing of an act that would otherwise not be “socially acceptable”. She said in our society we have established norms when it comes to clothing, specific to occasion, institution, destination, etc. and a wooden dress would not be acceptable in any established occasion. However in art, she is able to do it as there are no such barriers.
Cooray shared that there is much to be learnt from performance art. It is a matter of creating a conversation, and she said that while there are those who will simply dismiss her efforts as the works of someone who is not of sound mind, people are becoming more aware and even this time around, there were those who saw her work and reached out to her, asking for explanations so that they may understand better. She shared that, that is the goal; to create awareness and to give way to a conversation.

June 5, 2020 byJennifer Anandanayagam No Comments
Earth Day Network, first established in 1970 and based in Washington DC, America, is an international environmental organisation that operates in more than 190 countries.

September 3, 2019 byThe Sunday Morning No Comments
It is not untrue to say that every individual goes through a number of pitfalls when travelling the path that is life, and it is only human to be faced with a sense of darkness and pain when falling