“One day Vengsarkar came, the other day Manjrekar came, the next day Tendulkar came. But none of the bas****s could know how to play the game.”

– Percy Abeysekera, while cheering SL in a match against India, who were having a bad patch then, in Colombo 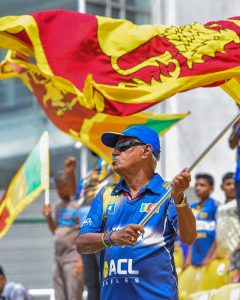 Percy Abeysekera is the most iconic cheerleader in world cricket

It was the first-ever win by a non-Test-playing country against a Test nation in the ICC World Cup.

The 1979 World Cup was staged in England alongside the inaugural ICC Trophy, which was then named the ICC World Cup Qualifier. Sri Lanka, led by Anura Tennekoon, had won that tournament out of 15 participating countries. It began on 22 May 1979 and all its matches finished, including the semi-finals, by 6 June, just three days prior to the start of the second World Cup.

Sri Lanka beat Canada in the ICC Trophy final in Worcester on 21 June, just two days before the World Cup final played between the West Indies and England at Lord’s. Significantly, Sri Lanka won that final only three days after upsetting India in the World Cup tournament. That was truly a historic victory, made almost 40 years ago on 18 June at Old Trafford, Manchester. The ICC Trophy and the World Cup, held simultaneously in England that year, put Sri Lanka’s cricketing prowess in the limelight like never before.

Percy Abeysekera, who does not need an introduction in the field of sports today, was witness to this remarkable encounter which did not have any TV footage or photo coverage.

“That was my first visit abroad. There was a fundraiser for my trip in the Daily News newspaper. I think the Sri Lanka team and especially the Bloomfield players that time knew me very well. On that trip, I used my national flag in cheering for the first time. I still have that flag,” Percy told The Sunday Morning last week.

“There were only a handful of Sri Lankan spectators at the venue (Old Trafford) on Saturday (16 June). I remember Sunil (Wettimuny), Roy (Dias), and Duleep (Mendis) scoring 50s when we batted first. Mendis had a belter before he was run out. (Srinivas) Venkataraghavan was captaining India then. The opening bowlers Kapil (Dev) and (Karsan) Ghavri both got hammered. First, it was Sunil and Dias and then Mendis, who played the anchor role towards the end of the innings. “I still remember how Bishan Bedi dropped a catch in front of us. It was a very high catch from Mendis. When Bedi was moving to grab it, we shouted: ‘Hey, there’s a mad dog behind you!’ Then he dropped the dolly,” he laughed. 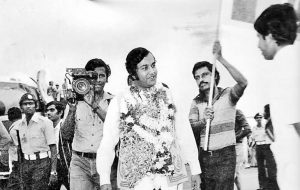 Percy at BIA receiving Gamini Dissanayake, who came with the news that SL received much-awaited ICC Test status, in 1981

When the continuation of the game took place the following Monday, India chased 239 to win. After a 60-run partnership for the first wicket between Gavaskar and Gaekwad, India lost wickets in tandem.

“I can still remember that when I went to the grounds on Monday (18 June), there were around 50-odd Lankans at the grounds. They had come to England from a ship called ‘Lanka Rani’. We got together and cheered our team heavily – shouting, jeering, singing, and waving the Lions flag,” Percy recalled.

“Warnapura got the breakthrough by removing Gavaskar. Then DS (leg-spinner Somachandra De Silva) and DLS (Stanley De Silva, a right-arm fast-medium bowler who faced a tragic death the next year in a motorcycle accident in Balapitiya) played havoc. The two sent back the entire top and middle-order Indians to the pavilion one after the other. Nobody could top a 50, I still remember.”

Warnapura, who captained Sri Lanka in that match in the absence of Tennekoon, had said on record that the islanders were at least a decade late in getting the ICC Full Membership or Test status.

This fascinating victory against India in Manchester made their bid stronger. Two years later, in 1981, the ICC had been fully persuaded. Then Cricket Board President late Gamini Dissanayake received a hero’s welcome from co-officials and cricket fans, including Percy with the flag, when he returned to Katunayake with the much-awaited news that little Sri Lanka was a Test cricket nation. They met England in Colombo in their inaugural Test match in February 1982. 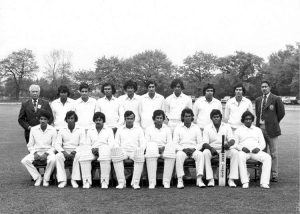 Match days: 16 and 18 June 1979 (After a late start on Saturday, 16 June, only SL could complete their innings. Sunday was a rest day and Monday, 18 June, was the reserve day of the match where India batted) Venue: Old Trafford, Manchester, England Toss: India, who opted to field 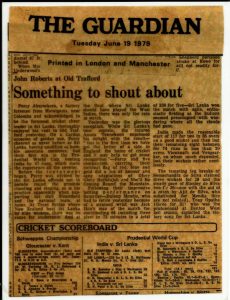 The day after the match, The Guardian remarked on Percy’s influence on the match by describing his heroics off the field that day, more than the match itself.

Something to shout about

Percy Abeysekera, a factory foreman from Matutgama (sic), near Colombo and acknowledged to be the foremost cricket cheerleader in Sri Lanka, thoroughly enjoyed his visit to Old Trafford yesterday. On a Cardus occasion of golden sun, Percy cheered as never before as Sri Lanka, having qualified as humble associate members, had their first win in the Prudential World Cup, beating India by 47 runs, which made the experience all the sweeter. While Sri Lanka’s tour captain, the injured Anura Tennekoon, expressed his delight with the result – “this is the first time we have got the better of a side in England, the home of cricket and it may help us get some recognition” – Percy and five compatriots, carrying their national flag of red, blue, and gold did a lap of honour and sang adaptations of Glory Glory Hallelujah and She’ll Be Coming Round the Mountain.”